JAKARTA: When leaders of the fourth and fifth most populated country in the world meet, what can their peoples expect to gain?

A lot, presumably. The potential for cooperation between Indonesia and Russia is immense, that presidents Megawati Soekarnoputri and Vladimir Putin can certainly come away from their meeting in Moscow with something.

So immense, in fact, that it would be best to impose a reality check early on, and adjust our expectations accordingly.

One thing that we should not expect, contrary to suggestions by some, is for Jakarta and Moscow to join hands and provide a counterbalance to Washington's hegemony.

That would simply be too naive to suggest. Neither Russia nor Indonesia is in any real position to challenge Washington, even if we both had vehemently opposed the US-led war in Iraq.

We should not place too much hope either on the many memorandums of understanding (MOUs) that will be signed by the two governments during Megawati's visit. Many MOUs in the past have never been realised because they were not thoroughly prepared and, in most cases, they were never followed up to completion.

Jakarta's plan to purchase Russian military hardware, circumventing an embargo imposed by the United States, traditionally Indonesia's chief supplier, would draw big headlines but only time will tell whether it will come to anything.

Short of any real tangible result, the best we can hope from the Moscow meeting is for the two leaders to compare notes on their countries, the challenges facing them and, most important of all perhaps, how each has managed these problems.

Making comparison is imperative given that Indonesia and Russia, despite their distance and different historical paths, have many similarities: the two are large both geographically and in terms of population; both are still in a transition to a democracy; both are struggling economically; and both have to deal with problems of insurgency.

Given these many similarities, Megawati and Putin can learn a lot from each other about how they cope with their problems.

Putin, for example, decided to withdraw Russia from an International Monetary Fund programme but has acted decisively to wipe out the corruption that beset his government so that Russia's economy was not shaken by this move.

Megawati is also thinking about ending Indonesia's stay in the IMF's intensive care unit, prematurely perhaps, more for popular rather than economic reasons. But as long as corruption continues to be rampant in her government, leaving the IMF ward would probably not be a good idea.

While Putin has Chechnya to deal with, Megawati has Aceh, and neither has been successful in putting down the insurgency. Both leaders have tried the military way and the peaceful way. Here, again, they can learn from each other's experience.

When Megawati and Putin meet in Moscow, let's hope that they use their time effectively to learn from each other about government, leadership, crisis management and a host of other relevant matters. It's not exactly a tangible result, but let's hope both come out the wiser. 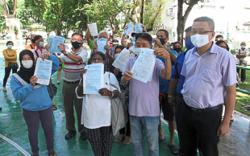