By The Effects Of The Opposition Taking Five States Will Be Felt For Some Time.

IN the years to come this election may well be remembered as Malaysia’s rite of passage to democracy. Though our hearts go out to many deserving candidates who were vanquished at the polls, there is much to celebrate in the manner the electoral exercise was completed.

Integrity of the system: There was no electoral violence. Ballot boxes, not bullets ruled the day. Though there were many complaints about the unfairness of the media, about monetary gratification to voters, about improper entries on the electoral roll and about the suspicious system of postal votes, all in all the integrity of the voting and counting processes was demonstrated. 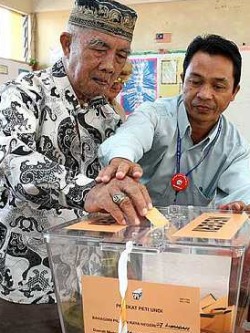 How else could one explain the sweeping victories of the Opposition in five State Assemblies and in 82 out of 222 parliamentary constituencies? In the aftermath of the upset results, the police acted even-handedly to keep things in check. The Election Commission acquitted itself well.

Those who take part in democratic elections must consent to the results thereof and must not try to circumvent unfavourable outcomes through undemocratic means as in Selangor in 1969 and in Sabah on at least two occasions.

Two-party system: What is heartening to note is that the world’s longest surviving multi-ethnic coalition – the Barisan Nasional – was challenged in most electoral districts by an informal multi-ethnic Opposition.

Here may be the beginnings of a wide spectrum two-party system. At the same time Barisan will face the challenge of how to maintain its multi-ethnic nature given its rejection by many non-Malays.

Freedom of speech: The election demonstrated the role of the Internet and of SMS in the dissemination of alternative sources of information. The overwhelming control of the ruling party over the conventional media was to some extent neutralised.

Federalism: Because of the Barisan Nasional’s simultaneous control of the Government at the centre and in most of the states throughout the last 50 years, Malaysia has largely operated as a unitary state with some federal features. This will have to change now as the “Opposition states” can be expected to assert themselves in all areas where the Constitution confers on them legislative, executive and financial autonomy.

Competition and conflict between the Centre and the Opposition states will be likely and constitutional procedures for resolving these differences will be tested to the full. In view of Sabah and Sarawak’s solid support for the BN, the leaders of these two states may demand more clout.

Legislative process: In the last 50 years the executive has dominated the legislature. With about 80 Opposition MPs in the Dewan Rakyat we can now expect some assertiveness on the part of Parliament vis-à-vis the executive. Hopefully, Bills will be subjected to greater scrutiny. With its loss of two-thirds majority, the Government will not be able to bulldoze constitutional amendments through with ease as in the past.

New politics: Hopefully, this election demonstrates a new political awakening. The electorate is not, any more, swayed exclusively by racial and religious appeal. The old technique of appealing to people’s fear and insecurities did not work this time. The feudal hold of party overlords seems to have weakened. The Malay electorate this time seems to have cast off traditional loyalties.

A maturing electorate saw through all the political rhetoric, the issues of corruption, arrogance of power and price rises. The non-Malay voters were unforgiving about many racial and religious slights and about issues of social justice and the perceived lack of impartiality in the judiciary. The voting population demonstrated that there are limits to its gullibility.

There is little doubt that the indifference of some superior court judges to the constitutional rights of many non-Muslims contributed to the alienation of part of the population.

Election disputes: A spate of these is likely to be filed. The citizens will watch with an eagle’s eye how even-handedly the judges handle these disputes. Past records are not so flattering.

MBs in Malay states: Except for the constitution of Sabah, Sarawak, Malacca and Penang, all other state constitutions provide that the Mentri Besar must be a Malay. This means that in Selangor and Perak, no matter who holds the most seats, the MB must belong to the Malay community.

Perak result: The Perak assembly result posed fascinating possibilities. No party or coalition holds an absolute majority of the 59 seats. Barisan has 28; DAP captured 18; PKR won seven; and PAS holds six. The combined opposition vote is 31 to Barisan’s 28. But as the Opposition is not a formal coalition, we have a “hung assembly” – a chamber with no clear-cut leader.

Under the constitution of Perak the Sultan was not obliged to appoint the leader of the largest party or coalition as the next MB unless he commanded the confidence of the assembly. The Sultan had a margin of discretion to determine who actually commands this confidence.

A further complication is that politicians often resort to the despicable practice of “floor crossing.” Sabah has witnessed this shameful phenomenon many times. If, firstly, the Perak Opposition victors can prevent their members from party hopping, and secondly if they could convince the Ruler that they are united as a coalition (even if not formally registered as such), they have a good chance of receiving the Sultan’s nod to head the government.

It to the credit of the Sultan that he has done the democratic thing of giving the first chance to the Opposition.

The effects of the Opposition taking five states will be felt for some time.