While the Covid-19 pandemic and struggling economy has gripped the nation and Malaysians, our power jostling politicians continue to be more preoccupied with power and positions.

MANY ongoing political developments in our country are simply not making sense – at least that’s the consensus. It’s becoming harder to make sound assumptions because they are mostly unsound.

That’s because we think on the level when we make our assessments, unlike politicians, who are not normal. They are bent on pushing Malaysia into becoming a dysfunctional democracy.

In the past week, I’ve had to force myself to read endless streams of data bytes, fake news, official statements, gossip and half-baked analyses.

The usually reliable news outlets are no better. In them are stories obviously planted by untrustworthy politicians or their operatives, to suit their interests.

It’s near impossible to switch myself off from this exercise in futility, but there’s no running away from it. My job requires me to know as much as I can.

My bosses, clients and contacts call me up incessantly to be brought up to speed with the latest. I am expected to know, so they think.

I’m supposed to be the one to distinguish real news from fake ones.

But I’ve had to tell them, apologetically, that I’m just as clueless as them because we’re now dealing with very confused politicians who urgently need sanity checks.

They can’t be thinking straight, and that’s conclusive. Every afternoon, between 5pm and 6pm, we dutifully turn on the television to learn the latest number of people infected with the dreaded coronavirus.

I guess some of us also want to find out what eye-catching attire Defence Minister Datuk Seri Ismail Sabri Yaakob has chosen from his wardrobe. The shirts look like batik, but that’s still open to debate.

Slowly but surely, we’ve become utterly confused by the number of abbreviations he has used for the numerous directives and standard operating procedures.

When his briefings end, we wait patiently for Health Ministry director-general Tan Sri Noor Hisham Abdullah to update us on the status of the pandemic.

I’m certain that none of our politicians are bothered with these statistics. The only numbers they are concerned with is whether they have accumulated enough statutory declarations (SD) to topple the sitting Prime Minister, while those in government are counting if they still have the numbers since the commanding majority is negligible.

Here’s why we’re befuddled. Prior to Opposition leader Datuk Seri Anwar Ibrahim seeking an audience with the Yang di Pertuan Agong, he said he had “formidable and convincing” support from Members of Parliament to form a new government. He was quoted on Sept 23 as saying that their support was “indisputable”.

After his audience with His Majesty, Istana Negara issued a statement to say Anwar did not present a list of Members of Parliament who supported him.

The Comptroller of the Royal Household Ahmad Fadil Sham-suddin, in a statement said, Anwar had disclosed the number of MPs he claimed had declared support, but he didn’t provide their names.

OK, let’s give Anwar the benefit of the doubt. Surely he can’t be so brazen as to seek an audience with the King if he had nothing to show for it.

offered. So that comes back to the point why SDs are useless and worthless because the signatories can change their minds at any time.

If some press reports are to be believed, there were also purported letters signed by some heads of parties that were sent to the King. Names have been mentioned but they have remained silent. Nobody is even sure if they have received the approval of their members, as working with political enemies is surely a serious matter.

Well, that’s not something we can verify, but what is factual is that the King no longer wants to meet any of them. It’s probably right on the money to suggest that the palace and many of the Rulers are upset with the conduct of our politicians. Fuming, to be precise. In their minds, these politicians are disconnected from reality.

The Covid-19 pandemic has crippled the economy, yet these politicians are only interested in jostling for power. Their actions are just disgusting.

Now, there are other mind-boggling scenarios if Anwar indeed has strong numbers. He would need to get the support of Umno, PAS, Warisan, Amanah, PKR, DAP, Gabungan Parti Sarawak and the Barisan Nasional to put together a powerful coalition.

Umno leaders are getting pelted by their grassroots for working with Parti Pribumi Bersatu Malaysia. It’s no secret that many Umno leaders are angry that their party has given so much to Bersatu despite having greater numbers.

One top Umno leader told this writer that “the longer we stay in the government, the faster we will die”.

But how can Umno leaders work with the DAP, or how would the DAP tell its members that it’s now OK to work with Umno?

Surely the MCA and MIC, and GPS, would never want to cooperate with the DAP either. Don’t forget Gabungan Rakyat Sabah, either.

It’s also unimaginable that PAS would sit side by side with Ama-nah.

Have we now come to the point where “the enemy of my enemy is my friend” and Malaysians are about to hear how these politicians are doing this “to save Malaysia” rather than to save themselves? Unfortunately, many gullible Malaysians will believe this.

As we cast our attention on Anwar, Tengku Razaleigh Hamzah has suddenly appeared out of the blue. None of us were aware that he submitted a letter to the Dewan Rakyat Speaker Datuk Azhar Azizan Harun to table a vote of no confidence in the PM.

Ku Li, as the Kelantan prince is called, has now hijacked the limelight from Anwar.

The whole country has suddenly received pictures of Ku Li with Tun Dr Mahathir Mohamad and his wife, along with loyalist Datuk Khairuddin Abu Hassan.

Khairuddin said the photo was taken four years ago, until it was pointed out to him that he and Dr Mahathir were wearing, or holding, facemasks.

Wearing facemasks, as we know, only became mandatory after the country was hit by Covid-19 this year.

Then, Khairuddin said this wasn’t something new to Dr Mahathir since he suffered a lung infection several years ago. However, others soon claimed the picture was taken last month when Ku Li hosted a birthday party for Dr Mahathir.

Sure, we believe you.

However, it’s hard to ignore that a plot seems to be hatching to stop Anwar.

For the benefit of young Malaysians born only after 1989, Ku Li left Umno to form Parti Melayu Semangat 46 after a bitter challenge against Dr Mahathir in Umno.

Well, that doesn’t mean they can’t be friends or new allies in a political arrangement. However, the moral of the story is, don’t place all your eggs in a politician’s basket. They can’t even be honest about a picture.

The New Malaysia, which most of us are hoping for, isn’t taking shape. The same ageing actors are still refusing to leave the stage with all still fighting to play the same lead role.

The Malaysian audience has had enough, and the time has come for these stalwarts to realise they have overstayed their welcome. The world has moved on without them. It’s time we dim the lights and tell them that the show is over. Please leave the building. 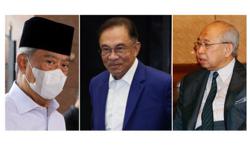