The way to a man’s heart is through his stomach, likewise the nation

Time to deliver: The public is counting on and holding accountable all promises made by the Pakatan government.

OUR politicians don’t seem to get it. Malaysians are exhausted from their endless politicking at the expense of homing in on pressing issues affecting the people.

The message of the people from the Tanjung Piai by-election is clear, but it looks like that reality hasn’t set in as it should have.

Politicians succumb to amnesia easily and develop dementia much earlier than the rest of us, which probably explains why promises pledged in their manifesto can even quickly be forgotten.

A clutch of politicians from previous elections have even placed an expiry date on their manifesto – the voting deadline of 5pm on polling day.

But things have changed. For the first time in the country’s electoral history, promises made and broken are being discussed, even 18 months after the general election.

The public is counting on and holding accountable all promises made by the Pakatan Harapan government.

Sure, three years are needed for these promises to be realised but breaking them is another thing altogether.

Reneging on promises is worse than not fulfilling them, and that has become a significant source of resentment for the people.

So, imagine the disgust of Malaysians when reading about a plot – real or imagined – executed in the dead of the night to meddle in the country’s leadership transition.

It’s unprecedented in the nation’s politics for party allegiance to be cloak and dagger affairs, and solidarity to have little meaning. But that’s indicative of the kind of politicians in our midst these days.

Before this, we knew exactly who we were dealing with – they were either with the Government or the Opposition. There were no perforated lines and the distinction was clear. 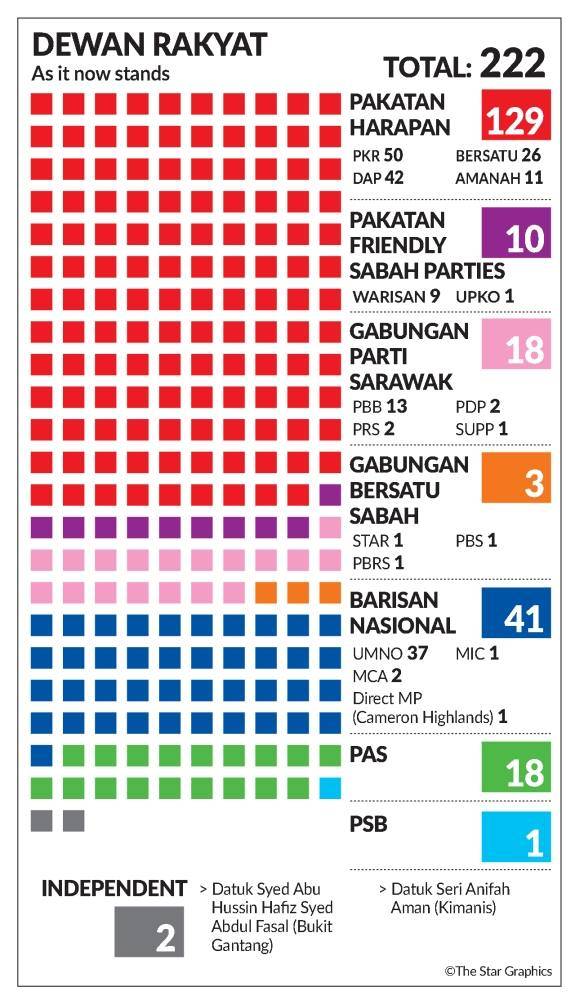 Now, we have the Opposition – namely PAS and some Umno leaders – that has pleaded with the Prime Minister to remain in his post until he turns 98. Yes, two years shy of a centurion, that’s how old Tun Dr Mahathir Mohamad will be by the next general election.

So now, we have the Opposition rooting for the head of the government to keep his post instead of wresting it from him, which is the primary ambition of normal opposition parties.

Now, it’s apparent Azmin isn’t rooting for his party boss but Dr Mahathir instead, the leader of another party, Parti Pribumi Bersatu Malaysia, a component party of PH.

Within Umno and its 37 seats, consensus have split nearly down the middle as to whether Dr Mahathir should continue, or the reins be handed to Datuk Seri Anwar Ibrahim instead.

This is likely what’s happening – Umno probably doesn’t have a candidate in mind from its ranks to sit in the hot PM seat and form the next government. Isn’t that what an opposition party is supposed to do, offer the alternative?

So, the best they can hope for is to have someone who is prepared to, at the very least, be sympathetic to them.

It’s complicated, and unfortunately, there are no hand guides. So, are you following so far? Welcome to Malaysia’s paradoxical politics.

Bersatu, which won only 13 parliamentary seats in last year’s polls, had the privilege of heading the federal government and most state governments. PKR has 50 seats, DAP 42 and Amanah 11.

Bersatu, however, gained seats after a series of defections, going from 13 to 27. It lost one following the Tanjung Piai byelection, though.

Dr Mahathir, of course, was given the job because without him, PH would never have been able to knock Barisan Nasional out of government.

He was the super glue that bound everything together while Anwar was still languishing in prison. Anwar wasn’t a Member of Parliament, so he certainly couldn’t become the PM.

So, for peculiar reasons, Bersatu now has more Mentris Besar in states where the combined PKR-DAP seats number higher.

And DAP, which has the sizeable 42 parliamentary seats, has cleverly stayed clear of the issue, so far.

For all the bravado, no one in PH can hope of becoming the PM without the support of the DAP, because Cabinet revamps would be impossible without the approval of PH component parties.

Dr Mahathir’s hands are tied. He failed to implement his Cabinet changes and even when he attempts the next one, he will find that juggling party and geographical factors won’t make the job any easier.

When Dr Mahathir was the PM first time around, he was the most powerful man in Umno and Barisan. He had full control and could choose who should succeed him.

The scenario is far different now. Most members of the press, and even veteran politicians, seem to overlook the new political determinants.

Besides being the smallest component party, there is also an agreement, signed by representatives of PH, that Anwar will succeed Dr Mahathir. His name is specifically mentioned.

But there is no timeline for how long Dr Mahathir stays. The two-year tenure was mentioned by the leaders but was eventually omitted in the agreement since many didn’t want Dr Mahathir to be a lame duck PM.

So, it will be the PH presidential council that will have to enforce the agreement because their leaders are signatories. The council also has the power to decide how long Dr Mahathir stays.

The agreement was inked by representatives of the four parties at midnight on July 14,2017, at the PKR headquarters in Petaling Jaya.

But the agreement may not be enough, and that’s why the move by Anwar’s nemeses include – even if these dramas are mere optics – tying his hands and cutting deals to ensure their political relevance.

If anyone thinks that politicians spend their time working for the people, then they must have been born yesterday, or live in a dream world.

Here’s what Anwar faces – the Federal Constitution stipulates that the PM must be a member of the Dewan Rakyat who, by the decree of the Yang di-Pertuan Agong, commands a majority in Parliament.

PKR rebels have sent a message to Anwar that they can cause much mischief – with the help of PAS and some Umno MPs – if they command enough numbers to support a motion for Dr Mahathir to serve the full five-year term.

Obviously, it’s not because they love him dearly or want him to be in the pink of health, as the top position has a way of chipping away precious minutes and seconds of one’s life given the demands of the job.

Anwar is stuck, in a way. He can’t sack his defiant PKR leaders, and for these recalcitrants, starting a new party would hardly be an ideal solution. In fact, it could even tear apart the PH coalition now under heavy criticism from the people.

Anwar’s image and leadership have taken a beating by his inability to keep the party together.

His nemeses were once his fanatical supporters, but now, they have turned against him.

They were on the front lines of the Reformasi protests and movement of 20 years ago when they took the streets.

Surely there must be something very wrong somewhere for this change of heart?

So, everyday people are caught in what has is now known as the Great Unhappiness, where we grapple with the cost of putting food on the table, struggle to pay bills, and deal with the lack of job opportunities and a weakening ringgit.

Reforms and good governance may top the priority list of the PH, but this new culture doesn’t fill the people’s stomachs – only Perut Economy matters at the minute.

It doesn’t help that the public sees some ministers as either incompetent or arrogant. Perception is everything in politics, after all.

We haven’t seen any shared prosperity, but what we do know is that politicians are busy fighting among themselves for positions, party and government, all at our expense.