Last week, Malaysians were rocked by an interview given by the princess of the Reformasi movement to a Singaporean newspaper.

Nurul Izzah Anwar remains a symbol of stoic and elegant resistance, and continues to inspire many young Malaysians. Her defence of her father and loyalty to him is a perfect example of filial piety.

Nurul Izzah’s grace and candour beguiles even her harshest critics. Her precepts and principles put many Malaysian politicians to shame, especially in an age where political expediency and electoral success seem to be the rule of the day.

Her interview with the Straits Times was freehearted and revealing.

The frustrations that Nurul Izzah spoke about reminds us that while the government changed on May 10, 2018, a large part of the ancien regime remains in place due to lack of political will and wisdom on the part of the new government to make a rupture with the past.

Nurul Izzah’s criticism of the government’s failure to understand and deal with the concerns of Malaysians, especially on bread and butter issues, is a cautionary tale for the government to ensure it is not a “one-hit wonder.”

The obsession with 1MDB must abate and the real work of governing the country must come first.

Also, the constant “U-turns” on policies and manifesto promises is turning into a charade and causing Malaysians to lose hope in the political process altogether.

Some weeks ago, I attended a dinner with some friends, and naturally the topic of politics came up. As usual, I shared my views as forcefully as I always do and spoke about how the government needed to buck up.

I used the example of the Democratic Party of Japan; the DPJ overthrew the mighty Liberal Democratic Party (LDP) in 2009 but lost power subsequently in 2012. Besides internal bickering and a complete lack of policy cohesiveness, the DPJ lost because it over-promised and under-delivered.

However, one friend remarked, rather poignantly: “We did all we could possibly do to change the previous government. As Malaysians, we rallied, we cried, we shouted, we screamed, we criticised, and we prayed. But if the new guys are going to be like the old guys or worst, what hope do we have? What more can we do?”

There was silence, and as I am always in the habit of breaking such awkward silences, I said, “Don’t stop doing what you did, even though they are the government now. Continue to stand up and call them out when they are wrong and praise them when they are right.”

I now find myself coming to another interview that piqued my interest, again over the weekend.

Khairy Jamaluddin's critics have always branded him as eager and opportunistic but in fact, he remains Barisan Nasional’s best bet.

Naturally intelligent and eloquent, he has always stood out in Umno in part because of a rebellious streak. But like all politicians, at times compromises must to be made for the greater good, and Khairy has had his fair share of it.

But if one were to look deep inside, there has been a consistency in him that has often been overlooked. Khairy has always talked about a Malaysia with the Malaysian sun shining on everyone.

Khairy’s interview with TheStar’s RAGE team was incisive and forthright. It was also prescient and insightful. If only the opposition has more of him and less of Lokman Adam.

Khairy spoke about the challenges facing Malaysia Baru and the Malay fear, which is something most non-Malays fail to understand and cannot make sense of.

From a non-Malay perspective, Malays enjoy ample protection through our constitutional framework and no right-thinking non-Malay would challenge any of it. There is a general acceptance of this arrangement because it is the way things have been and will always be.

So while obviously a lot of this concern is fanned by Umno and PAS politicians, the fact is that when government leaders speak in such terms, they are providing the opposition with the ammo to attack them.

The problem with many government leaders is the failure to get out of the opposition mindset and abandon the view that the best defence is offence.

Nurul Izzah and Khairy compel us to ask this most painful question: Is Malaysia governable?

I think yes. There is so much going for us as a country, but the starting point is for us to start thinking and acting as Malaysians.

We also need our politicians to behave like grown-ups. The constant bickering between the government and the opposition is degenerative.

It is time for both sides of the political divide to put Malaysia first.

Also, it is incumbent upon on Malaysians to continue to stand as sentries against abuse of power and high-handed state action to ensure that the current government does not entrench itself like the previous one did.

The government should also disabuse Malays of the notion that their special position is under threat and not by engaging in the politics of “one-upmanship” with Umno and PAS, but by working hard to address the concerns of most Malays through a focus on the economy and cost of living.

The speech by Tun Daim Zainuddin at Universiti Teknologi Malaysia recently should be the template for the new Malay agenda. Also, in the words of Nurul Izzah, the government must “embolden the moderates.”

Lastly, we must not shy away from being critical of the new government despite one’s hatred for the previous one.

In the end, we Malaysians must do all we can to ensure Malaysia is governable. 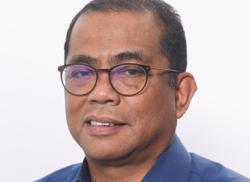 Time for Bersatu to sacrifice for Malays by joining Umno, says Khaled Nordin