The rakyat will decide

We’ll know whether Sabahans are fed up of the toxic rivalry between two former chief ministers. Will they be given the choice of a fresh face to vote for?

Locked in conflict: Both Shafie (left) and Musa have had assemblymen defect to form majorities. — AP/Bernama

AT 8.30am on Wednesday, I tweeted: “I got a Sabah govt joke but it is collapsing.”

The night before, several political contacts texted me that something big would happen the next day in Sabah. They said the Parti Warisan Sabah/Pakatan Harapan/Upko government would collapse. Those who were politically savvy got my joke. Others on Twitter did not. They only got it when, at 6.47pm, I tweeted The Star Online report, “Musa Aman claims to have simple majority to take over Sabah govt”.

But they could not proceed to the Istana for Musa to be sworn in as chief minister, a post he had previously held from 2003 to 2018. There were only 32 assemblymen at Musa’s Seri Anggerik residence in Kota Kinabalu. The 33rd assemblyman, Datuk Jamawi Jaafar, who won the Kemabong seat on Umno’s ticket and jumped to Warisan, only arrived at Seri Anggerik at 9.20pm.

The next morning, it was Shafie and not Musa who was at the Istana. Realising that he had lost the majority in the 65-seat state assembly, the Warisan president sought consent from the Yang di-Pertua Negeri Tun Juhar Mahiruddin to dissolve the state assembly. Juhar did what Perikatan masterminds had thought he would not do: He consented to a dissolution.

And what I tweeted that morning, “Karma is a frog. If you form a govt with frogs, your govt falls by frogs. #SabahPolitics”, came true – Shafie’s government had fallen.

The big question that day was why Juhar consented to the dissolution of the government? Did the masterminds in Kuala Lumpur fail to convince the Yang di-Pertua Negeri that dissolution was unnecessary?

Who won and lost in Thursday’s political drama?

Shafie lost, as his government fell. But the Senallang assemblyman and Semporna MP won a second chance to rule Sabah with the declaration of snap polls.

Musa won, as he brought down Shafie’s government. But the Sungai Sibuga assemblyman lost as he failed to become chief minister.

To me, the people won. It is power to the people. Let the rakyat decide which parties and politicians they want to rule their state.

It is also a triumph of sorts for Sabahans who felt they were cheated when the Parti Bersatu Sabah (PBS) government fell in 1994. A few days after PBS won the state elections, several of its assemblymen defected to Barisan Nasional. Then Sabah chief minister Tan Sri Joseph Pairin Kitingan tried to save his nine-year-old state government by calling for a snap election. But he could not get the consent of the then Yang di-Pertua Negeri. Sabahans who had voted PBS back into power felt their vote should determine which party ruled their state instead of the assemblymen who jumped so that Barisan came into power.

The fall of the Sabah government on Thursday put a spotlight on the Yang di-Pertua Negeri.

In 1985, the then TYT swore in two chief ministers, Pairin and Tun Mustapha Harun of Usno. The courts decided that the PBS president was the rightful chief minister. In 1994, after winning the Sabah polls, Pairin had to wait 36 hours outside the Istana gate to be sworn in as chief minister.

The observer said the dissolution was not a shocker to him because it had been a possibility.

“But I would have expected the TYT to at least show that he is above the fray by first listening to all the 65 assemblymen before reaching his decision.

“He has to remember that his controversial appointment of Shafie as CM (chief minister) in May 2018 is still being challenged in the courts, ” he said.

“The TYT could have referred to the good example shown by how the King had exercised his Constitutional duty in February this year in determining who had a majority of MPs to become the PM or whether to dissolve Parliament.” (The Yang di-Pertuan Agong spoke to all the MPs before making his decision.)

Many in Sabah, especially those who were against the Warisan/Pakatan/Upko government, are still debating whether the TYT should have given his consent. But that’s academic now, I told them, just focus on winning the snap polls. I’m just happy that the mandate has been returned to the people.

Musa was appointed CM when Sabah STAR, which had contested against both the government coalition and the opposition coalition, supported Barisan.

However, after two Upko and four Umno assemblymen jumped, the TYT swore in Shafie as CM two days later.

Strangely, some people are calling the 14 jumpers who caused the Warisan/Pakatan/Upko government to fall traitors. Out of the 14,11 are Barisan alumni (assemblymen who won on the Barisan ticket but jumped to join Warisan and Upko). The remaining three are from DAP and PKR. Why did those who are angry now that these 14 switched sides not get mad when the Musa government fell in 2018 because of frogs?

The rakyat will decide in the snap polls who they want to govern them. This time, 13 new seats will be added to the 60 state seats.

We’ll know whether Sabahans are fed up of the toxic rivalry between Shafie and Musa. Will they be given the choice of a fresh face to lead Sabah? 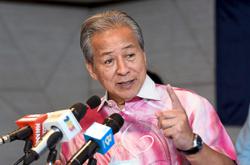 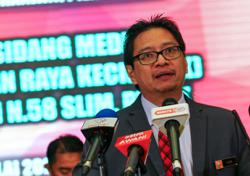