The state of Malaysian courtesy

Well wishes from the King and Queen

THE Rukunegara, the national philosophy, affirms courtesy and morality (kesopanan dan kesusilaan) as the most important character traits in maintaining good relationships in our plural society.

On the other hand, arrogance and causing offence to the sensibilities of others are thoroughly condemned, regardless whether committed by the rich, the powerful, or linguistic and cultural chauvinists.

Observing discussions on social media and reports in traditional media, especially in relation to partisan politics and hawkish pressure groups, this writer wonders whether Malaysians care more about being respectful of diversity than being arrogant. Or is it now the other way around?

Respect, politeness and arrogance are character traits inculcated mainly by parents, families, teachers and educational institutions. Have we taught our children and students sufficiently about being respectful to humanity without arrogance?

There is an Islamic tradition on being respectful, where Mu‘adh ibn Jabal said, “The Messenger of God commanded me saying, ‘O, Mu‘adh, I command you to fear God, to speak truthfully, to fulfil the promise, to deliver what you are entrusted with, to shun perfidious actions, to care for the neighbour, to have compassion towards the orphan, to be soft-spoken, to be generous in extending greeting, to do your best no matter what you do, to curtail your fallacious hope, to cleave to the faith, to study the Quran, to love the hereafter, to be anxious in regard to the Day of Reckoning, and to act with humility.” (narrated by al-Bayhaqi).

This writer cautiously believes that many Malaysians, regardless of religious affiliation – or rather, because they are inspired by their faith – are indeed respectful of each other.

The Malaysian founding fathers called this muhibbah, which means mutual love or affectionate friendship among humankind. It is more than mere tolerance.

Merciful human relationship is a great idea from scriptural Revelation, recorded in the Quran. Its basis is the understanding that humanity originates from the common origin called nafs wahidah – a fact emphasised throughout the Quran.

There is essential unity of all people as God’s creatures. All of us belong to one human family without any inherent biological superiority of one over another. The Prophet Muhammad was quoted as saying, “Man is but a God-fearing believer or a hapless sinner. All people are the children of Adam, and Adam was created out of dust.”

In the worldview of Islam, while among Muslims there is “religious brotherhood”, between Muslims and followers of other faiths, there is “biological brotherhood” of the human race. According to this teaching, all of us are biologically brothers and sisters as we are from one living entity (nafs wahidah), whose proper name is Adam.

It is one of the wonders of God’s creation that from one person (Adam), we have grown to be so many; each individual has so many faculties and capacities, and yet we are all one. In other words, this common origin should appeal to the solidarity of humankind, as all of us are brothers and sisters.

Arising from this kinship, we humans have mutual obligations, rights and duties.

Because all humankind is one, our mutual rights and dignity must therefore be treated with the full respect they deserve.

This is valid even if each of us has his own religious community. It is in this context that the Prophet Muhammad states, “All creatures are equal dependents upon God (‘iyalullah), and those dearest to God are the ones who treat His dependents most kindly.”

Or in another translation: “The whole of mankind is the family of God and he amongst His family is dearest to Him, who does good to others.” (narrated by al-Bayhaqi).

Indeed, the Prophet highlights the fact that all humanity is equally under the care of God, He who feeds, nourishes and sustains them. Moreover, those dearest to God are the ones who are of benefit to others.

Thus, Islam strongly condemns all racial prejudices. Our “natural” outward differentiations – whether in terms of gender, race, language and skin colour – are deemed by Islam to be merely superficial labels.

It is a person’s inner goodness, that is, his “nurtural” ethical quality – measured according to universal religious values – that should be the basis for our esteem for him.

We should never ridicule, insult or unnecessarily be suspicious of another just because he is of a different gender, race, language or hue. Racial quarrels must, by all means, be avoided through proper understanding of one’s own religion in relation to the religions of others. 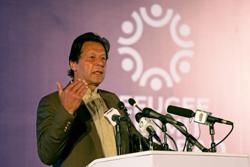 Well wishes from the King and Queen