What it takes to be PM

The Umno election brought in a team made up of long-time Najib loyalists and a younger echelon that he intends to groom. (From left) Ahmad Zahid, Muhyiddin, Hishammuddin, Shafie, Najib, Khairy and Mukhriz.

Rumours about Deputy Prime Minister Tan Sri Muhyiddin Yassin resigning have faded but that has not stopped the chatter in Umno circles about the political succession.

SOMETHING clicked in the heads of many Umno members as they watched Prime Minister Datuk Seri Najib Tun Razak and President Barrack Obama stand on stage taking questions from the international media back in April.

It was a big moment because the eyes of the world were on Malaysia.

The Prime Minister stumbled twice over the word “proliferation” but there was no denying it – Najib spoke better English than the President of the United States. Or rather, he spoke English as it should be spoken, thanks to his British education. His Queen’s English was a stark contrast to Obama’s American-style English.

As the witty Kelantan politician Datuk Alwi Che Ahmad put it: “I’m proud to be Malay but I’m also proud my PM didn’t speak English like a Malay.”

Umno leaders have been among the vocal opponents of using English to teach Mathematics and Science in schools but almost every one of them agree that anyone aspiring to be Prime Minister must be able to speak good English. They have known that for a long time but Umno is a party of Malay nationalists, it is full of “my country, right or wrong” types and it is in their blood to defend our Bahasa Kebangsaan.

Still, English has become a must and a lot of it has to do with this thing known as “maruah”. It means “dignity” but in this case it is about not losing face on the international stage.

The English thing helped propel Datuk Seri Hishammuddin Hussein back into the running for the top job – in the minds of Umno members, at least. The MH370 tragedy made international news and that was when the average Malaysian realised how important it was for a minister to be able to communicate in good English.

Actually, every Prime Minister to date has spoken good English because they came from that era of English language schools.

But, as many in Umno would argue, it takes much more than English to be taken seriously as a Prime Minister candidate and this is what the Umno circles are talking about – who among the three vice-presidents has what it takes to move up.

The last Umno election was very much about electing “Team Najib”. There was so much buzz about the debut of Umno’s electoral college system of voting that many failed to notice how Najib had worked behind the scenes to bring in a team that he could work with. 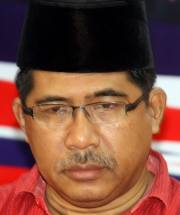 Alwi: 'English a must for every PM'


The end result was that he has the ideal deputy in Tan Sri Muhyiddin Yassin and vice-presidents (VPs) Datuk Seri Ahmad Zahid Hamidi, Datuk Seri Shafie Apdal and Hishammuddin who are his loyalists.

“Najib does not have to watch his back or look left and right whenever he wants to do something,” said a Najib insider.

Muhyiddin, 67, is seven years older than him and is unlikely to make a bid for Najib’s job. But in Najib’s mind, it is vital that his deputy is qualified to move up should anything happen. Just because Muhyiddin is not in line for the job, many in Umno tend to overlook the fact that he has the credentials to take over and to hold the party together.

“If there is going to be a change, the DPM must be seen as a future PM, with the ability to rise up if the situation calls for it,” said the insider.

Nevertheless, Muhyiddin has been quite realistic about the fact that this will be his final term and it is likely that the recent rumours about his resignation were fuelled by supporters trying to set the stage for their respective men to move up.

“Muhyiddin is not going anywhere soon. The two of them need each other and Najib knows that Muhyiddin will facilitate whatever plan he (Najib) has in terms of succession,” said the Putrajaya insider.

Najib may be seen as slow to make decisions and rather stiff in his people skills, but he is a shrewd politician.

The timing of the succession, said the insider, is not up to the three VPs. Instead, it will be set by Najib and it will be at a timing that is also comfortable to Muhyiddin.

“The two of them will plan the transition in a way that is good for the party and the country,” said the insider.

Which brings us to the big question: Who among the three VPs will move up?

Past bids for the deputy president post have often narrowed down to a choice between likeability and ability.

“Umno is quite prone to likeability, it’s the nature of us Malays. That’s why shows like Akademi Fantasia and Imam Muda are so popular. But this is about choosing someone to lead, we are not choosing a singer or celebrity,” said Lanchar assemblyman and supreme council member Datuk Sharkar Shamsuddin. 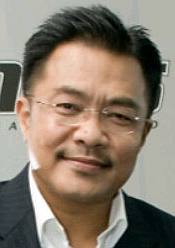 Sharkar: 'Likeability is a big factor in Umno'


Sharkar is the sort who considers everyone a friend and when pressed to choose among the three, he insisted: “I love them all.”

There has been quite a bit of fantasising about a Deputy Prime Minister from Sabah. Shafie sailed in because Umno recognises the need for a VP from Sabah. But the idea of a No. 2 from Sabah is not selling just yet in Umno even though the eastern shores are critical for the party’s hold on power.

That means the field belongs to Zahid and Hishammuddin. Najib will have to put aside his emotions in deciding between a friend and a cousin.

Zahid, 61, is a long-time loyalist and was Najib’s political secretary when he was Youth and Sports Minister. In the 2009 party election, he had obediently withdrawn from the deputy president race after a telephone call from Najib.

But Zahid is in a different place today after emerging as the top gun among the three VPs in last year’s party polls. The Home Minister had been the name on everyone’s lips, the toast of the party.

One of his supporters put it bluntly: “The president has to respect who the party wants.”

Zahid’s X-factor is that he is able to make everyone in Umno feel special when he meets them. Umno folk also like the fact that his parents were religious teachers. While ministers love to display pictures of the Prime Minister in their office, framed portraits of his humble-looking parents dominate his Home Ministry office.

Zahid’s tough stance against crime won him admirers all round. But while his “Malay agenda” image resonates with the Umno crowd, it makes those outside rather wary of him. He also used to be quite sensitive about what people said about his English but his proficiency has improved.

“His image outside Umno is not as beautiful as his image inside Umno,” said an Umno official.

Hisham, 53, has the overall image: he is presentable and has the pedigree but his struggle in the last party election hangs over him. Last year was not easy for him. The endless politics, work stress and years of chain-smoking came to a head and he ended up in hospital after a mild heart attack.

He became a grandfather last December and the grandchild seems to have brought him luck because things are starting to turn around for him.

But the focus of many party members has been on two younger leaders, Khairy Jamaluddin and Datuk Mukhriz Mahathir. They epitomise the future of Umno and the Umno crowd are depending on them to “capture the new generation market”.

Khairy, 38, made a dizzying return from the political wilderness last year. He was appointed to the Cabinet and was the only Umno leader to make a spectacular sweep of the divisional votes in his re-election as Umno Youth leader.

He is a newsmaker and it has to do with a combination of things – his intelligence and political savvy, good looks and that certain edginess that appeals to the younger cohort.

He is uber fit and is the first Youth and Sports Minister who seems able to do any kind of sports, from sprinting and obstacle courses to football and basketball. He showed his commitment to the national education system and silenced his critics when he enrolled his eldest son in a national school.

Khairy is a much better person today than during those heady days when his father-in-law was Prime Minister. He has acquired a deeper understanding of Umno politics and he tells friends he wants to go with the flow.

There is no denying that the next step for him is the VP post. People in Umno speak of him as Prime Minister material but it is a long and treacherous road and he will need to go through many more portfolios before he comes near the hot seat.

Besides, Khairy will have to contend with another aspirant, Mukhriz, who is Kedah Mentri Besar.

Mukhriz came in with an image as a modern and urbane professional. But he has taken to his job like a fish to water, showing an instinctive flair for recognising what Kedahans want. He does not show off, is not confrontational and all this has helped him make a seamless transition into Kedah society.

Mukhriz, 49, is closer in age to Hishammuddin than to Khairy. But he came into the game late in the day because Tun Dr Mahathir Mohamad disallowed his children from going into electoral politics for as long as he was in power.

Dynastic politics comes with its own burdens and the two rivals still have much to prove before they are taken as serious contenders when the time comes.

Umno has had this pantang or taboo-like attitude regarding a contest for the top two posts since the epic fight of 1986 that split the party into two. As such, the party’s political succession will rest largely in the hands of the president.

Aspirants to the top post will not only have to score goals in the court of public opinion, they also have to play ball with the president and impress him. And they will have to speak good English.