Unkind cut: Former world No.5 squash player Low was unceremoniously let go from the national team, with no conversation and such short notice. What precedent would this set for future players? — Filepic/The Star

BEING a professional athlete in Malaysia is a pretty hard life.

It’s a huge gamble, to put aside further education and other opportunities, just to try and compete competitively at a global level.

If you don’t end up being among the very best in the world, competing against players with tonnes of resources behind them, you may end up with nothing.

This is because there aren’t really any safety nets for Malaysian athletes. There’s no EPF or pension plan, so if you get dropped from the programme someday, you’re pretty much thrown out in the world on your own to fend for yourself. You’re practically another worker in a gig economy.

Anyone thinking about a career in professional sports will surely factor this into their decision-making.

If I had a child who was facing such a dilemma, I’d surely think twice before advising him or her on taking such a big risk. I certainly wouldn’t blame anyone who thought it was just too big a sacrifice, for too uncertain a future.

Now the real problem is: what if everyone thought this way?

We’d never get a Lee Chong Wei, Azizulhasni Awang, Pandelela Rinong, or Nicol David – because none of them would have dared to start off down this path in the first place.

It’s easy for us to cheer such champions on after they’ve made it. But these guys don’t just come pre-blessed with superhuman abilities. They put in immense amounts of blood, sweat and tears, and need a supportive ecosystem.

In short: If we want Malaysian champions to make it, we have to mould them into champions.

It’s obviously fair to ask: what justifies all this investment in an athlete?

I think the best way to answer this question is to remember what it’s like to sit at a Mamak store on a night when Lee Chong Wei was playing.

If you’ve ever felt that tension, that exuberance, and that sense of shared nationhood, then perhaps you can appreciate how the contribution of athletes might best be described as “priceless”.

Let’s be frank, though. For every Lee Chong Wei that makes it, there must be tens, maybe hundreds of Malaysian athletes who don’t.

I certainly don’t believe it’s for lack of trying. I’m sure that right now, there are athletes giving 110% every single day, trying to bring glory to Malaysia.

You and I may not know their names yet. Some of them we may come to know some day, God willing. Some we may never know, and some we may even some day forget. In April last year, an online news portal ran a video and story about Mariappan Perumal, a Malaysian Paralympics weightlifter who won Malaysia’s very first paralympics medal in 1988. He won his second Paralympics bronze medal in 1992.

The video showed this history-making Malaysian champion leading a life in near poverty, living in public housing on a very small pension. The story helped bring attention back to a Malaysian who truly deserved it, but it also makes us question: Who else have we forgotten?

Do we give up on athletes once they are past their prime? Or when they’ve been injured, or out of the limelight for too long?

Mariappan may have long retired, but some of our athletes are still out there trying their best to make it.

A more recent controversy emerged last week when it was announced former world No.5 squash player Low Wee Wern (and a number of other athletes) would be dropped from Malaysia’s sports programme.

Squash is (by far) my favourite game, and I had the opportunity to drop Low a message over Twitter and begin a conversation.

She emphasised time and again that this whole problem wasn’t about the money.

Apparently, the government’s decision was conveyed unilaterally through the Squash Racquets Association of Malaysia, without any direct discussion or consultation with the athletes themselves. I understand a meeting with the government was requested, but refused.

Low did mention that she could understand the budget cuts in a time of Covid-19 and floods, and acknowledged the considerable support she had received in the past. For instance, the government paid RM70,000 in partial costs for her last surgery (but she had to source an additional RM50,000 on her own to fund the rest).

She said she could accept it if the government really felt she had nothing left to contribute (I don’t personally agree). She just felt it was just a little painful to be so unceremoniously let go, with no conversation and with such short notice (I suppose this is the equivalent of being suddenly fired from your job with two weeks’ notice), and was worried about the precedent this set for future players.

She didn’t dwell long on how she rejected interest by recruiters from universities like Harvard and Princeton because she wanted to focus on playing for Malaysia, but she did seem proud to have proven that we can produce a homegrown top five world-ranked player – using Malaysian coaches and training locally in Malaysia.

In line with the work of civil society organisations like Projek #BangsaMalaysia, perhaps this is yet another example of how we shouldn’t just look to the government to solve our problems. Maybe it’s time to look at models like crowdfunding to nurture and forge future Malaysian champions. As always, we have to remember that we have the power within ourselves to make the changes we want to see.

As an aside, when I mentioned crowdfunding to Low, her (very moving) response was basically to refuse, saying other people need the money more. Her own quiet work helping others reminded me of Dota 2 e-athlete Chai “Mushi” Yee Fung, who I’ve also seen help those less fortunate while refusing publicity. (Dota 2 is multiplayer online video game.)

In closing, there’s no way this article would be complete without talking briefly about up and coming badminton superstar Loh Kean Yew.

Long story short, he was born and raised in Penang (just like Low), got a better offer and support from Singapore, became Singaporean in 2015, and won the BWF World Championships (the first “Singaporean” to achieve this feat) in 2021.

Is it just me, or is there a lesson to be learned here?

Future sponsors and fans can contact Low Wee Wern at iam@weewernlow.com. Nathaniel Tan can be reached at nat@engage.my. The views expressed here are solely the writer’s own. 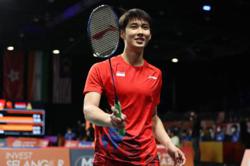