Poland will place German Patriot missiles on its territory WARSAW (Reuters) - Poland is preparing to deploy the German Patriot air defense system on its territory, after Berlin refused to place this system in Ukraine, Defense Minister Mariusz Blaszczak said on Twitter.

"After talking to the German Defense Ministry, I was disappointed to accept the decision to reject Ukraine's support. Deploying the Patriots to the western Ukraine would increase the security of Poles and Ukrainians," Blaszczak tweeted on Tuesday evening.

"So we proceed to working arrangements for placing the launchers in Poland and connecting them to our command system," added Blaszczak. 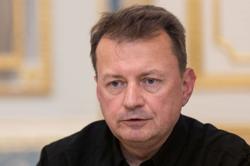