By Christian Akorlie and Cooper Inveen

FILE PHOTO: A girl walks past a flag of Ghana outside the Cape Coast Castle, in Ghana, July 28, 2019. REUTERS/Siphiwe Sibeko

Ofori-Atta said in a video address on Sunday that Ghana's government had finished its debt sustainability analysis, but he did not provide any information on plans for foreign debt that are anxiously awaited by international creditors.

"We are confident that these measures will contribute to restoring macroeconomic stability," he said.

The government is in talks with the International Monetary Fund for a support programme to relieve its debt distress.

The local cedi currency has plummeted more than 50% against the dollar in 2022, while the central bank hiked its main lending rate to 27% last Monday after inflation hit a 21-year peak in October.

Ofori-Atta said the government wanted to minimise the impact of the debt swap on small investors so would not apply the terms to Treasury bills or to holders of individual bonds. There will also be no haircut to the principal of the bonds, he said.

"It should ... reinforce expectations that Ghana is on its way to an IMF staff-level agreement. We expect the Ghana cedi to benefit as a result," said Razia Khan, Chief Africa Economist at Standard Chartered.

"There was little question that Ghana needed LCY (local currency debt) coupon reductions to restore macro sustainability. By excluding retail investors, this is likely to be more politically palatable," she added.

How the plan will impact individuals is still to be determined as many hold bonds through mutual and pension funds.

Ofori-Atta said the government would set up a financial stability fund with the support of development partners to help domestic financial institutions, including banks and pension funds, weather the swap. 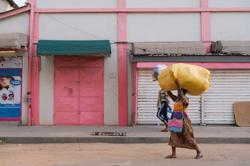