The book fair, which will last until Dec. 11, has attracted around 133 publishing houses and will include 24 symposiums for people to interact and discuss various topics.

In a statement released by the Council of Ministers, Mikati highlighted the broad participation of Arab publishers in the fair, describing it as a cultural landmark where writers can interact with readers.

The first edition of the book fair was held in the mid-1950s, making it one of the oldest book fairs in the Arab region. 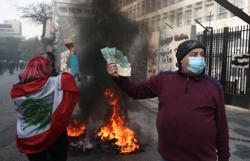