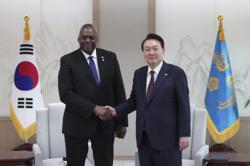 Concrete mixer trucks are parked at a factory due to a strike by a truckers' union in Anyang, South Korea November 28, 2022. Yonhap via REUTERS

SEOUL (Reuters) - South Korea's government will decide on Tuesday whether to take the unprecedented step of invoking tough strike-busting laws to end a six-day stoppage by truck drivers which is hurting the economy, the presidential office said.

President Yoon Suk-yeol will preside over a cabinet meeting to discuss issuing a start-work order after the government failed to reach a deal with unions in talks on Monday.

The strike - the second in less than six months by truckers demanding minimum pay - is disrupting industrial activity at a time when Asia's fourth-largest economy expects a slump in growth to 1.7% next year.

Yoon's office said cabinet would consider becoming the first South Korean administration to issue an order to force striking transport workers back to their jobs.

Failure to comply can lead to punishments such as cancellation of licences and three years in jail, or a fine of up to 30 million won ($22,550).

If approved, the order would be executed without delay, Transport Minister Won Hee-ryong said.

"The CTSU will not yield to this pan-government crackdown," the union said in a statement on late Monday.

The union plans to hold 16 rallies nationwide on Tuesday, it added.

The government is unwilling to expand a minimum pay system beyond a further three years, while the union says it should be permanent and wider in scope.