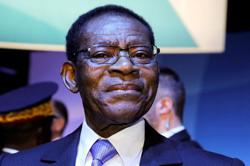 DAKAR (Reuters) -Equatorial Guinea's President Teodoro Obiang Nguema has won re-election with 95% of the Nov. 20 vote and his party took all the senate and parliament seats, his son Vice President Teodoro Nguema Obiang Mangue said on Twitter on Saturday.

Reuters was not able to immediately verify the claim.

A win would given Obiang, 80, a sixth term in office, extending his 43-year rule and cementing his place as the world's longest-standing ruler.

"The definitive results prove us right again," the vice president tweeted. "We continue to prove to be a great political party!"

Obiang's ruling Democratic Party of Equatorial Guinea (PDGE) and coalition won the full 55 seats in the senate and the 100 seats in the lower house, known as the Chamber of Deputies. The president can now appoint the remaining 15 senate seats, his son said.

The West African country of around 1.5 million people has had only two presidents since independence from Spain in 1968. Obiang ousted his uncle Francisco Macias Nguema in a coup in 1979.

Obiang has always been elected with more than 90% of the vote in polls that international observers have questioned. Critics say Obiang has rigged elections and done little to drag the country out of poverty despite great personal wealth.

Rights groups accuse him of muzzling dissent and cracking down on rivals. Protests are mostly forbidden, media is heavily controlled, and political opponents are often arrested and tortured, they say.

His son, who observers see as a potential successor, was convicted for embezzlement by a French court in 2020. Assets that foreign powers say he bought with ill-gotten gains include a crystal-covered glove worn by Michael Jackson, an armoured Rolls-Royce limousine and a yacht.

Father and son have denied wrongdoing. 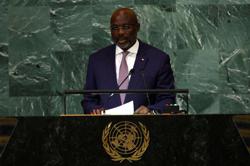