(Reuters) -Iran's Revolutionary Guards said on Friday that its intelligence unit had foiled a bomb attack in the southern city of Shiraz, two days after a deadly shooting at a shrine there, the guards' news agency Sepah News said.

"A bombing in Mo'ali Abad Street in Shiraz was detected and foiled by the Revolutionary Guards intelligence," Sepah news said, without giving further details.

Wednesday's shooting, which was claimed by Islamic State, killed 15 worshippers at the Shah Cheragh shrine.

The Iranian government has organised nationwide demonstrations against the shooting following Friday prayers. Funerals were also due to take place for the victims.

"We will take revenge for the blood of the martyrs of Shiraz," said Tehran Friday prayer leader Haj Ali Akbari.

Officials said they had arrested a gunman who carried out the attack at the shrine.

The attack by Islamic State, which threatens to inflame tensions, took place amid widespread anti-government protests.

Iran's clerical rulers have faced nationwide demonstrations since the death in police custody of Mahsa Amini, a 22-year-old Kurdish woman, on Sept. 16. 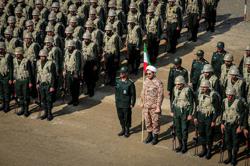