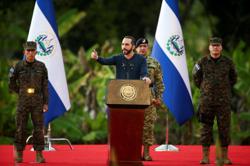 After a historic rise in homicides in March, Bukele asked Congress to authorize a state of exception, which suspends some constitutional rights, to launch an offensive against criminal gangs that have plagued the Central American country for decades. The measure is supported by the vast majority of the population.

Since the crackdown, police and military have captured more than 53,000 alleged gang members and collaborators, generating a wave of criticism from human rights groups for overcrowding conditions, rights violations - such as reports of torture - and the deaths of some 80 people in custody.

For the ICG, this heavy-handed policy could generate a "boomerang effect." The group said precarious conditions and unjustified arrests could fuel tensions, giving rise to prisoner riots, escapes and regrouping of gang members outside.

"Beyond the financial, humanitarian and reputational costs of more than doubling the prison population, the campaign could generate resentment and perhaps backlash from gang members who see no way back into law-abiding society," said the Brussels-based NGO.

The Salvadoran government, which is currently building a mega-prison to house 40,000 inmates, did not immediately respond to request for comment.

Since Bukele took office as president in June 2019, the number of homicides in the country has more than halved. Last year Reuters and other media reported the reduction had been achieved at least in part via secret meetings with imprisoned gang leaders.

Many Salvadoran criminal gangs originated in the United States after a wave immigration to North America during the Salvadoran civil war from 1979 to 1992. Mass deportation then moved criminals back to El Salvador and other countries in the region, where gangs control extortion and drug sales. In El Salvador, authorities estimate more than 70,000 people make up the Mara Salvatrucha, its rival, Barrio 18, and other smaller criminal groups.