Head of Zaporizhzhia nuclear plant has been released, IAEA says 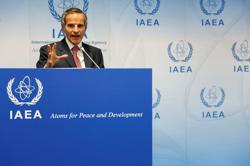 FILE PHOTO: A Russian all-terrain armoured vehicle is parked outside the Zaporizhzhia Nuclear Power Plant during the visit of the International Atomic Energy Agency (IAEA) expert mission in the course of Ukraine-Russia conflict outside Enerhodar in the Zaporizhzhia region, Ukraine, September 1, 2022. REUTERS/Alexander Ermochenko/File Photo

VIENNA (Reuters) - The head of the Russian-occupied Zaporizhzhia nuclear power plant in Ukraine has been released, U.N. nuclear watchdog chief Rafael Grossi said on Monday after a detention that Ukraine blamed on Russia and called an act of terror.

"I welcome the release of Ihor Murashov, Director General of #Ukraine's #Zaporizhzhya Nuclear Power Plant; I have received confirmation that Mr Murashov has returned to his family safely," Grossi said on Twitter.