WASHINGTON (Reuters) - The United Nations Security Council will convene on Friday at the request of Russia to discuss damage to two Russian gas pipelines to Europe that has caused gas to spew into the Baltic Sea.

The French U.N. mission, which holds the presidency of the 15-member council for September, said the meeting would address the Nord Stream pipelines that Russia and European partners spent billions of dollars building.

Gas leaks as a result of suspected sabotage discovered on the two pipelines on Tuesday have roiled energy markets and heightened security concerns.

Suspected explosions tore through the undersea pipelines on Tuesday. The Nord Stream 1 pipeline, once the main route for Russian gas to Germany, was already shut but cannot now be easily reopened. The new Nord Stream 2 pipeline had yet to enter commercial operations.

NATO and the European Union warned of the need to protect critical infrastructure from what they called "sabotage", though officials stopped short of saying who they blamed.

It remains far from clear who might be behind the attack, if one is proven, on the Nord Stream pipelines.

Russia, which slashed gas deliveries to Europe after the West imposed sanctions over Moscow's invasion of Ukraine, has also said sabotage was a possibility and said accusations by some that it perpetrated the damage were "stupid". 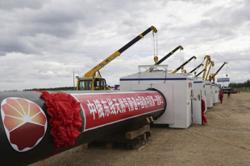