PRAGUE (Reuters) - Thousands of Czechs protested in Prague on Wednesday against the government's handling of soaring energy prices which have cut into pocketbooks as winter approaches.

The demonstration on a national holiday in Prague's main square, organised by a number of far-right and fringe parties including the Communists, followed a similar protest earlier in September that drew tens of thousands of people.

The organising group "Czech Republic First!" opposes the European Union and NATO and calls for the central European nation of 10.7 million to be militarily neutral.

The Czech Republic is a member of both the EU and NATO.

Protesters held banners like "End the comedy" and many waved Czech flags as the sun appeared after morning rain.

"The Czech nation has risen, and it is taking its country back," one of the organisers told the crowd as he opened the protest which was streamed online to squares in other cities.

"A government has two duties: to ensure our security and economic prosperity. This government does not fulfil either of these duties," he said.

High energy prices, fuelled by the war in Ukraine, have piled pressure on governments across Europe to cushion the blow of mounting energy costs for consumers and businesses.

The current centre-right government of Prime Minister Petr Fiala this month adopted a string of measures, including financial aid for companies and price caps on electricity for households. 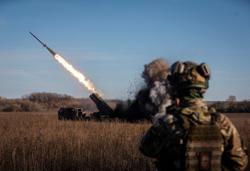