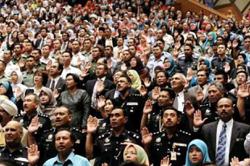 Mark Serwotka, General Secretary of the Public and Commercial Services Union (PCS) poses for a photograph during an interview with Reuters at Britain's Labour Party's annual conference in Liverpool, Britain, September 26, 2022. REUTERS/Phil Noble

LIVERPOOL, England (Reuters) - "Speaking truth unto power" has long been the motto of Britain's civil service, but now some government workers charged with offering ministers impartial advice whatever their party are fearful of their political bosses and are keeping quiet.

Some say it's been a long and slow whittling away of confidence among civil servants, or public sector officials, who for years have been accused of resisting change by elected lawmakers, particularly in the governing Conservative Party.

But it was the sacking of the top official at the finance ministry by his new boss Kwasi Kwarteng on the day that Liz Truss was appointed prime minister that sent shockwaves through a service which has already been charged with reducing numbers to save government money.

Bob Kerslake, head of the civil service between 2011 and 2014, said the sacking of Tom Scholar as permanent secretary at the Treasury broke with the convention of having officials that serve the government "whatever their political affiliations".

"(It) creates a sense of fear inside the civil service at senior level which will prevent them for giving the honest advice to ministers that they need to hear," he told Reuters.

"You need the civil service to be robust and honest right from the off," said Kerslake, rejecting accusations that they have resisted change. He now serves as an independent member of the upper house of parliament, the House of Lords.

Just over two weeks after Scholar's departure, Truss's new finance minister Kwarteng launched a new fiscal policy, without the normal independent scrutiny of government spending plans, that sent markets into a tailspin and the pound to a record low against the dollar.

The civil service is a quintessentially British institution, immortalised in the 1980s TV satirical programme "Yes Minister" which chronicled the career of a hapless minister who struggled to get his policies past his supposedly impartial permanent secretary - the most senior civil servant in a government department - and who wielded the real power in the show.

It has long been seen as essential to running Britain, with government advisers considered crucial to taming some of the more exuberant ideas touted by new ministers, sometimes bluntly telling them their proposals simply will not work.

For many in the civil service and for the unions representing all government workers, Truss has signalled what could be a fundamental change -- favouring partisan advice over a dispassionate assessment of policy decisions.

She has long criticised the finance ministry's "orthodoxy" which she blames for years of low economic growth. Several of her lawmakers have also attacked the civil service for being too slow to challenge established thinking, especially during years of wrangling over Britain's departure from the European Union.

Dave Penman, general secretary of the FDA union which represents professionals and managers in public service, has described the removal of Scholar as the start of "an ideological purge of permanent secretaries".

"I think that what that did (Scholar's sacking) was send a very clear signal that we're not into impartial advice, we are now into: this is how it will be, if your face doesn't fit you're gone," he told Reuters.

It is a sea change that has rattled some politicians and investors, with Kerslake worrying that the new prime minister might want it to become more akin to the U.S. political system where many top jobs change hands when there is a new president.

A government spokesperson said: "The civil service is focused on delivering for the citizens of the UK - growing the economy, tackling the cost of living and making sure people get the NHS (National Health Service) services they need."

On possible strike action, the spokesperson said the government was "fully committed" to engagement and that "industrial action should always be a last resort".

Kwarteng's first fiscal package -- containing tax cuts and tax breaks that critics said benefitted the wealthiest and were not funded in the short term -- came without an independent assessment from the Office for Budget Responsibility, which scrutinizes government spending.

U.S investment bank JPMorgan highlighted how the undermining of key institutions -- from the independence of the Bank of England and judiciary, to the independent monitoring of fiscal choices -- had fuelled market scepticism of government policy.

"In our view, that distrust is entirely justified," it said.

Truss has said she wanted to review the mandate of the Bank of England but then rowed back by repeating that the new government supported the bank's independence. On the judiciary, the Conservative government have long criticised what it calls "activist lawyers" for frustrating the removal of migrants.

Some civil servants agree with the markets, and have become so disgruntled they are quitting their jobs, according to anecdotal accounts from several people in the service or those who have recently left.

Others fear there will be more cuts as the government tries to balance the books and several are tired after the ever-changing government, with the Conservatives on their fourth prime minister in just over six years.

"I think the whole attitude towards civil servants from the political side is worsening," said one former civil servant on condition of anonymity. "There's definitely a sense that things are worse under Truss."

Serwotka said in a survey, his union, which began a strike ballot of more than 150,000 civil servants on Monday, found that 50% of members said they were trying to get new jobs.

"It's a very chilling atmosphere," he told Reuters.

Former civil servants such as Kerslake fear for its future.

"I call it the 'how high' phase, which is ministers saying jump and civil servants say how high," Kerslake said. "And that is a risky thing, because it's then that ... bad decisions get made, ones we live to regret."