FILE PHOTO: A woman holds a farewell message for late former Japanese Prime Minister Shinzo Abe, who was shot while campaigning for a parliamentary election, outside the Zojoji temple where the funeral of Abe, will be held in Tokyo, Japan July 12, 2022. REUTERS/Issei Kato

TOKYO (Reuters) - A lavish, taxpayer-funded funeral for Japanese former Prime Minister Shinzo Abe has triggered a public backlash against the ruling party he led for years.

Some opposition lawmakers are boycotting Tuesday's state funeral and a man set himself alight in an apparent protest against the $12 million event, to be attended by foreign dignitaries including U.S. Vice President Kamala Harris and Indian Prime Minister Narendra Modi.

Here is what you need to know about why the funeral for Abe - Japan's divisive but longest-serving premier - has become a lightning rod for public anger.

WHY ARE PEOPLE OPPOSED?

Opposition has largely been fuelled by revelations of links Abe and his Liberal Democratic Party (LDP) had to the Unification Church, which became widely known after he was gunned down on the campaign trail in July.

The suspect in the shooting accused Abe of promoting the group, which critics call a cult due to its mass weddings and aggressive fund-raising tactics. The suspect said the church had impoverished his family, according to police.

Since then an investigation by the LDP has concluded that 179 of its 379 lawmakers had interacted with the church.

The rising cost of the funeral, which the government estimates at 1.65 billion yen ($11.5 million), has added fuel to the fire at a time of economic hardship for many.

Japan's last fully state-funded funeral for a prime minister was for Shigeru Yoshida in 1967. Subsequent ones have been paid for by both the state and the LDP.

HOW HAS OPINION SHIFTED?

Prime Minister Fumio Kishida announced his intention to host the state funeral six days after Abe was slain. At the time, the public was split in its support for the event, polls showed.

But as evidence of links between the LDP and the Unification Church mounted and the estimated costs of the funeral rose, opinion shifted. Some 62% of respondents in a recent poll by the Mainichi newspaper opposed the funeral, citing reasons such as Abe not being worthy of the honour and the high price tag.

The issue has pummelled Kishida's approval ratings. His support fell to 29% in a recent Mainichi poll, considered a danger level that means the government may run into trouble carrying out its political agenda.

In a grisly show of opposition less than a week out from the funeral, a man in his 70s was hospitalised after setting himself on fire near the prime minister's residence on Wednesday in an apparent protest against the funeral, local media reported.

WHAT HAS THE GOVERNMENT SAID?

Kishida has apologised and pledged to win back public trust by asking LDP lawmakers to sever ties with the Unification Church. He has acknowledged the funeral lacks overwhelming public support but has repeatedly sought to justify his decision.

He has praised Abe's domestic and diplomatic contributions as well as his legacy of his lengthy tenure as reasons why a state funeral is warranted.

During his two stints in office, from 2006 to 2007 and 2012 to 2020, Abe's nationalist rhetoric and muscular defence policy riled many Japanese wary of any change to the country's pacifist constitution drawn up after World War Two. 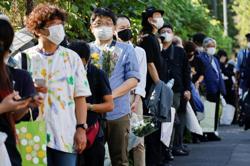