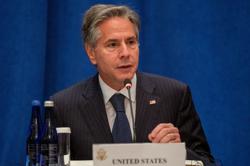 ASUNCION (Reuters) - Paraguayan Vice President Hugo Velazquez on Thursday said he will not resign until he has details of U.S. accusations against him, a reversal days after Washington accused him of having participated in acts of "significant" corruption.

On Friday, U.S. Secretary of State Antony Blinken said an associate of Velazquez had offered a bribe to a Paraguayan public official to "obstruct an investigation that threatened the Vice President and his financial interests."

The accusation unleashed a political earthquake in Paraguay, where Velazquez was set to be the government's presidential candidate in primary elections for the conservative Colorado Party in December.

"I had mentioned when I spoke with you that I was going to resign from office ... in order to go and defend myself as a common citizen," Velazquez told a local radio station.

"Yesterday afternoon I found out that the Public Ministry decided to ask the United States Embassy for the facts about the complaint against me. Today, I do not have a platform to defend myself because there is no investigation in the United States either," he added.

At the end of July, the U.S. State Department also accused former President Horacio Cartes of involvement in "significant corruption," for having allegedly obstructed an international investigation into transnational crime.

Cartes' political movement will face Velazquez's in the primaries and the winner will be a candidate for the general elections scheduled for April 2023. Cartes' candidate, former minister Santiago Pena, is still in the running.