Ukraine carries out emergency drills near nuclear plant on frontline Both sides accuse the other of attacks in the vicinity of the facility in recent days and engaging in what they call "nuclear terrorism".

U.N. Secretary-General Antonio Guterres, who wants a demilitarised zone to be established around the plant to avoid a potential catastrophe, will meet Ukrainian President Volodymyr Zelenskiy and Turkish President Tayyip Erdogan on Thursday for talks.

As part of the emergency drills, Ukrainian first responders donned full protective gear and then dealt with a man pretending to be a victim. After the team carried out a radiation scan they laid the patient on a stretcher, covered him in shiny silver film and then put him into an ambulance.

The first responders were themselves then checked for radiation before being hosed down and disposing of their gear. The drills will be repeated in the coming days, authorities said.

Ukrainian Energy Minister Herman Halushchenko said his government was very concerned about the safety of the plant in Enerhodar in the southeast of the country.

Ukraine and Russia have said they want International Atomic Energy Agency inspectors to visit the plant. The agency's chief, Rafael Grossi, has said he is ready to lead a mission.

The plant is still run by Ukrainian technicians even though Russian forces captured it in March during the early stages of its invasion of Ukraine.

Moscow calls its invasion an operation to demilitarise its neighbour and protect Russian-speaking communities. Ukraine and its allies accuse Russia of waging an imperial-style war of conquest. 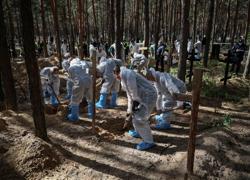