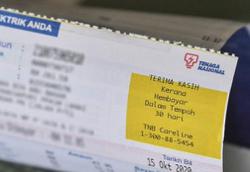 STOCKHOLM, Aug. 17 (Xinhua) -- The Swedish government on Wednesday unveiled a plan to subsidize electricity bills for households and businesses to ease the pain of soaring electricity costs.

Households and companies will both be compensated with at least 30 billion Swedish crowns (2.9 billion U.S. dollars), Swedish Prime Minister Magdalena Andersson announced at a press conference.

"The higher the electricity prices become, the larger the amount will be. This is a completely new way of thinking and the background is that the market was not created for such extreme situations as we have right now," Andersson said.

On Tuesday, electricity prices in southern Sweden hit a record high of 7.68 crowns per kilowatt hour.

A more detailed plan of the package will be presented in November. (1 Swedish crown = 0.096 U.S. dollars)