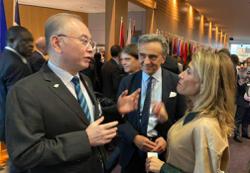 MADRID, Aug. 16 (Xinhua) -- Economic losses, premature harvests and even a change in the taste of wine could result from the intense heat being experienced in Spanish vineyards, a winemaker told Xinhua on Tuesday.

Spain has seen the hottest July on record, while the period from May-July was the driest since records began, according to data from the Spanish meteorological agency (AEMET).

Roberto Ijalba, a winemaker at Bodega Santalba in La Rioja wine region, said, "Spanish vineyards are suffering more than usual, and although the vineyards are resistant to high temperatures, everything has a limit."

However, he explained that not all wine regions share the same problems, since more arid areas are more used to extreme heat. High temperatures can also be good, since they reduce energy costs and the need for anti-pest or mold treatments. On the other hand, extreme heat leads to a lack of water, which can affect the development of the fruit, and some crops are ruined if vines lose too many leaves.

Ijalba believes this year will see fewer liters of wine produced, since with smaller grapes, there is less quantity of weight, water and must. If these extreme conditions continue, the flavor of wine will become sweeter, and alcohol content higher.

"The climate also influences the percentage of alcohol in wines. The hotter it is, the more alcohol the wine has, so we need to develop techniques to maintain the levels," he explained.

Due to the weather, in many places the grape harvest has taken place between two and three weeks earlier than usual. In La Rioja, the 2015 harvest was the earliest in the area since records began. Usually, the harvest in this area is at its peak around mid-October.