KYIV (Reuters) - Four Russian missiles hit a village on the southern outskirts of Ukraine's city of Zaporizhzhia early on Wednesday, killing a 52-year-old woman who was found in the rubble, the regional governor said.

"Four private buildings have been totally destroyed. Several dozen houses have been left without windows and roofs," Governor Oleksandr Starukh wrote on Telegram.

Rescue workers were still digging through the rubble hours later, the governor said. Electricity and gas supply to the village of Kushuhum were also disrupted, he added. 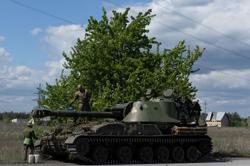