FILE PHOTO: Presidential candidate Kais Saied speaks during an interview with Reuters, as the country awaits the official results of the presidential election, in Tunis, Tunisia September 17, 2019. REUTERS/Muhammad Hamed/File Photo

TUNIS (Reuters) - Tunisia's President Kais Saied published on Friday in the official gazette a new draft of the proposed constitution that included minor amendments and did not affect his power.

The amendments of 46 chapters of the proposed constitution are mostly minor and formal, and come amid sharp criticism of a draft proposed by the president on June 30, with some considering it paving the way for a dictatorship. 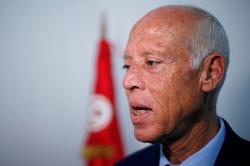