KIEV, May 27 (Xinhua) -- Ukrainian Prime Minister Denys Shmyhal said on Friday he discussed his country's post-conflict reconstruction with Germany's Minister for Economic Cooperation and Development Svenja Schulze during their talks in Kiev.

"Ukraine needs to restore the infrastructure in the liberated regions as soon as possible to ensure the normal logistics and operation of enterprises," Shmyhal wrote on Telegram after the talks.

The prime minister said he exchanged views with Schulze on the results of the meeting of the Group of Seven (G7) development ministers in Berlin last week and called on the G7 countries to take the lead in rebuilding Ukraine.

Shmyhal said that he briefed Schulze about a global platform entitled United24 (U24) for collecting charitable donations in support of Ukraine.

Besides, Shmyhal said Kiev is counting on Germany's support for Ukraine's European integration.

For its part, Ukraine is ready to contribute to the European Union's food security, energy transition, digitalization and enhanced collective security, and to offer a new promising market for European goods, Shmyhal added. 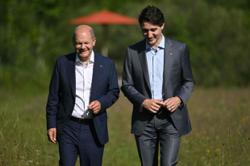