DAR ES SALAAM, May 25 (Xinhua) -- Tanzania's anti-narcotics authorities have launched a countrywide crackdown on cultivation of cannabis, a senior official said on Wednesday.

Gerald Kusaya, the commissioner general of the Drug Control and Enforcement Authority (DCEA), said 21 hectares of cannabis have been destroyed since the crackdown was launched on May 20.

"The 21 hectares of cannabis were found in Arumeru and Monduli districts in Arusha region," Kusaya told Xinhua in a telephone interview, adding that the crackdown has started in Arusha region because the region is notorious for cannabis cultivation.

He said two suspects were arrested in connection with the ownership of the cannabis farms, adding that two other suspects were found ferrying 220 kilograms of cannabis on a motorcycle.

"This crackdown is continuous and we will visit all regions in the country," said Kusaya, adding that the crackdown was being conducted by the DCEA in collaboration with other security organs, including the police.

He said DCEA was in the process of proposing amendment of laws on drugs to enable the authority to confiscate to the government farms engaged in cultivation of cannabis. 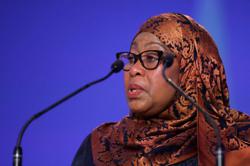