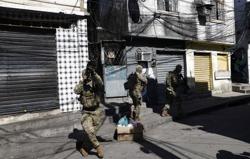 People react as they wait to know about their relatives at the Getulio Vargas Hospital, after more than eleven people were killed during a police operation against drug dealers in the Vila Cruzeiro slum, in Rio de Janeiro, Brazil May 24, 2022. REUTERS/Pilar Olivares

RIO DE JANEIRO (Reuters) - Eleven people were shot dead in a slum on the north side of Rio de Janeiro early on Tuesday during a police raid to capture heads of a drug-trafficking organization, police said.

The deaths included a woman who was hit in the exchange of gunfire between gang members and police in the Vila Cruzeiro favela, as Rio slums are called. Police said the other dead were suspected gang members who resisted the enforcement operation and opened fire on police with automatic weapons.