NAIROBI, May 21 (Xinhua) -- In an auditorium, a troupe of dancers moves with admirable agility to the percussion and singing engulfed the room.

Their vigor fanned by rousing applause from their audience.

These are the exciting scenes witnessed at the Bomas of Kenya, a pioneering cultural center nestled in Langata, a middle-income suburb some 13 kilometers northwest of capital Nairobi's central business district.

"Bomas of Kenya preserves tradition by curating cultural dances and music that cuts across all the tribes in Kenya. We also have 23 'bomas' which is a Swahili word for homesteads within the facility," Rose Mbadi, a Public Relations officer at Bomas of Kenya told Xinhua ahead of the World Day for Cultural diversity that is celebrated on May 21.

"The homesteads expose visitors to past and present living organizations of Kenya's diverse communities," she added.

The Bomas of Kenya was established in 1971 under the Ministry of Tourism to safeguard, maintain and promote the cultural endowments of over 45 tribes in Kenya.

Two years after its establishment, the center obtained resident dancers and musicians who very easily became a pull for tourists with their exquisite dance moves and attire.

The troupe of dancers and musicians was christened Harambee dancers to pay homage to the call for unity and cooperation in building the nation by Kenya's first president Jomo Kenyatta.

Within its expansive serene grounds, the center has carved out a large area where "bomas" or the villages stand.

Its other offerings include a restaurant that serves exclusively traditional cuisine, curio shops, a cultural library, and an art museum endowed with precious artifacts, and costumes, among other relics.

"When it comes to the dance and singing, the center showcases at least 50 dances representing all the communities. The dancers have to get acquainted with each community's style to achieve authenticity," said Mbadi.

"Our aim as a cultural center is to present the culture of each community in its purest and most authentic form, the musical instruments used in dances to have to be right, the costumes as well. We cannot settle for simply a semblance, we have to be accurate," she added.

Mbadi suggests that the institution has been receiving an influx of school-going children since the country rolled out a new all-encompassing curriculum in 2019.

"Children from both primary and high schools have been our most frequent guests in recent times and this is very encouraging because they are the future custodians of our culture," said Mbadi.

A teacher from a visiting elementary school who requested anonymity said that children need to be familiarized with their culture in their formative years to avoid departing from it under rising foreign influences.

A heightened consciousness of culture and traditions is seeing more Kenyans troop Bomas of Kenya, according to James Oluoch, a tour guide at the facility.

"These days cultural tourism is very popular and thus Bomas serves as a vital place to learn all things culture in one place without the effort of visiting every corner of the country," said Oluoch.

With the continuous threat to our culture by globalization, the tour guide remarks that there is a need to empower the young generation on matters of culture.

"Most of our young people do not even know their language, all they know is English. English has wide utility, yes, but we have to teach children the language of their roots. We need to balance things out," said Oluoch.

"If we do not, we stand losing our identity as a people and tourism revenues as our unique appeal to the outside world will be gone, "he added.

Jane Wambui, 24, is happy to stroll through the homesteads, the last time she was here was almost one decade ago.

"As you wander through the villages you become reflective and realize that such set-ups are rapidly being replaced by concrete and one may come under the illusion that this is how things have always been, which is not so," said Wambui.

One of the featured homesteads is that of the Maasai, a predominantly nomadic community from Kenya's expansive Rift valley region.

The homestead has a circular layout with five manyattas (a traditional Maasai home) and a grass thatched cattle enclosure at the center. The homes are made by women using mud, cow dung, and dried twigs.

Neither the manyattas nor the milking enclosures have doors as the Maasai viewed having one as a sign of cowardice.

All the villages represented have grain stores, watchtowers, and cattle enclosures.

Polygamy also comes out as a shared trait among the communities represented at the Bomas of Kenya. Nearly all homesteads register houses for multiple wives. 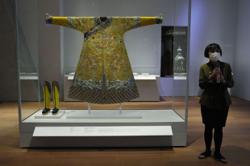