FILE PHOTO: Paul Rusesabagina, portrayed as a hero in a Hollywood movie about Rwanda's 1994 genocide, walks in handcuffs to a courtroom in Kigali, Rwanda February 26, 2021. REUTERS/Clement Uwiringiyimana

WASHINGTON (Reuters) - The U.S. State Department has determined that Paul Rusesabagina, who was portrayed in the movie "Hotel Rwanda" sheltering hundreds of people during the 1994 genocide, was "wrongfully detained," a spokesperson said on Thursday.

Rusesabagina, 67, has been sentenced to 25 years in prison over eight terrorism charges tied to an organization opposed to Rwandan President Paul Kagame's rule. He has denied all the charges and refused to take part in the trial that he and his supporters have denounced as a political sham. 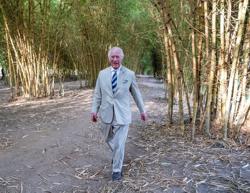