'Our blood is boiling': Victims angry as son of dictator closes in on Philippine presidency 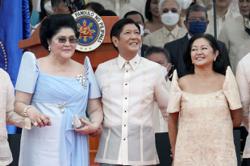 MANILA (Reuters) - Former political prisoner Cristina Bawagan still has the dress she wore the day she was arrested, tortured and sexually abused by soldiers during the late Philippines' dictator Ferdinand Marcos's brutal era of martial law.

Bawagan fears the horrors of Marcos's rule would be diminished if his namesake son wins the presidency in next week's election, a victory that would cap a three-decade political fightback for a family driven out in a 1986 "people power" uprising.