FILE PHOTO: A migrant restores a burnt tent in the Mavrovouni camp on the island of Lesbos, Greece, November 25, 2021. REUTERS/Louiza Vradi

LESBOS, Greece (Reuters) - Lucia Marcano was attending mass last month in the Catholic church on Lesbos when around 50 asylum-seekers from the island's migrant camp turned up, having heard that Pope Francis was due to visit.

"They came because they thought the pope would take them," said Marcano, part of a small Catholic community there.

Five years ago on his previous trip to the Greek island then on the front line of Europe's refugee crisis, Francis took three Syrian refugee families with him back to Rome.

Moria, the squalid and dangerously overcrowded camp he walked through that day, burned to the ground last year, having become a symbol of Europe's stumbling response to a crisis whose burden fell disproportionately on a handful of islands on its borders.

Francis visits Lesbos again on Sunday to deliver a message of unity. "They are our brothers and sisters," he said of refugees ahead of his trip to Cyprus and Greece.

But with the memories of the crisis of 2015 still fresh, the government in Athens has hardened its stance towards migrants, building closed holding centres in anticipation of a possible wave of refugees from Taliban-conquered Afghanistan, and intercepting boats at sea.

NOBODY FLEES WHO WAS 'LIVING NORMALLY'

Attitudes in the once welcoming local community, which was nominated for the Nobel Peace Price in 2016, have turned increasingly defensive too.

"Why is the pope coming? He's coming for them, not us," 80-year-old Evangelia Afentouli said while fishing in the harbour of the quaint village facing Mavrovouni, a temporary camp on an old army firing range where about 2,300 mostly Afghan asylum-seekers now live.

The ground there is muddy from the previous day's rain and workers are clearing out a burnt tent, while an excavator rumbles as preparations for the pope's arrival continue.

Nearby, a handful of Catholic asylum-seekers eagerly await his visit and speech.

"I know I will be blessed when he comes ," said Laurence, a woman from the militia-plagued Democratic Republic of Congo who has been on Lesbos for two years.

"I think he's a good person. He will hear our cry," added Jules Penda, a teacher who fled separatist insurgency in Cameroon.

"Nobody comes here because he was living normally in his country. All of us are running from one problem or another."

Christian Tango Muyaka, who escaped Congo with his family, is lined up to speak to the pope. "His visit is a comfort and it gives us hope that the future will be better for us," he said.

'TAKE THEM FROM HERE'

In 2015, hundreds of thousands of asylum-seekers arrived on Lesbos's beaches after risking the boat journey from Turkey.

Fishermen pulled people from the sea and ageing residents welcomed them ashore with blankets and clothes.

"Those of us who met them on the beaches, it was very hard," said Marcano, who has opened the church almost daily since moving from Venezuela 24 years ago. "I met blind people, injured people."

Now, after years of feeling abandoned by the government and Europe, the octogenarian Afentouli says her message to those in power - including the pope - is simple: "Take them from here, the migrants. They cause damage. They don't do any good."

Residents of Moria village blamed incidents of animal theft and break-ins on migrants, staging protests demanding that the camp be shut down.

"We are from a village that has been completely destroyed," said Thodoros Eskabas, a pensioner who says he has yet to be compensated for damage to his olive trees.

"For us it means nothing if the pope comes or not. All of the European Union leadership passed through Moria, what were the results?" he said.

"The pope is coming for sensationalist reasons." 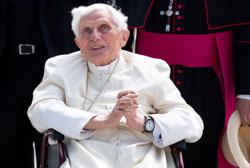 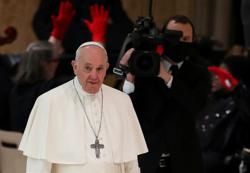