(Reuters) - A swimmer was missing off the coast of Western Australia on Saturday after what authorities said was an attack by possibly two sharks and "heroic" attempts by witnesses to help many others out of the water.

Police and rescue boats and helicopters were scouring the area around Port Beach in Fremantle, part of the metropolitan Perth area, for an adult male.

Police thanked witnesses who rushed to get other swimmers out of the water.

"I can say that the actions of the witnesses were heroic and very brave: for getting everyone else in the water out of the water and notifying everyone of what was happening," acting Inspector Emma Barnes told a news conference.

Australia ranked behind only the United States in the number of unprovoked shark encounters with humans in 2019, according to the University of Florida's International Shark Attack File.

Based on data from the Taronga Conservation Society, an Australian government agency in charge of several zoological parks, there have been 17 unprovoked shark attacks in Australia this year and two deaths. 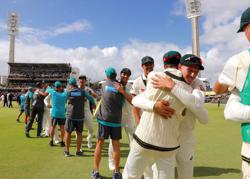