Hundreds of migrants in southern Mexico scramble for asylum applications

TAPACHULA (Reuters) - Around 1,000 migrants flocked to a sports stadium in southern Mexico on Tuesday to claim appointments for requesting asylum in the country as the national refugee agency grapples with surging demand that has overwhelmed capacity.

Thousands of other migrants have amassed in the city of Tapachula bordering Guatemala, often waiting months for responses to their asylum applications, a limbo that many migrants without jobs or money find intolerable.

Large numbers of Haitian migrants made their way to Del Rio, Texas, this month, forming a camp of 14,000 people just north of the Mexican border. Mexican officials are now urging Haitians who retreated to Mexico, fearful of deportation to Haiti, to complete their asylum applications in Tapachula.

A couple of hundred migrants were already in line by 5 a.m. on Tuesday and several hundred others joined during the day to make sure they could hang on to appointments in a system that is booked through the end of the year.

Mexico's Commission for Refugee Assistance (COMAR) said people with appointments through Oct. 20 who did not show up between Tuesday and Thursday would lose their spot.

Most asylum seekers clustered at the stadium were from Haiti, the nationality that ranks second for most asylum applications in Mexico this year, after Hondurans.

A representative from U.N. refugee agency UNHCR told migrants waiting in a line that snaked across the stadium parking lot that the appointment verification process would free up room for others.

"There are no new spots," he said. "Once there's space, they will offer you the corresponding information."

Some people were turned away.

Chenet, 38, a migrant from Haiti who did not give his last name, said he paid 6,000 pesos ($300) to someone in Tapachula to guarantee an appointment, not realizing it was fraud.

"They say there's nothing right now, there are no appointments," Chenet said. 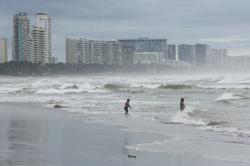 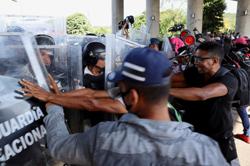