Law enforcement officers work near the scene after a gunman opened fire at the Perm State University in Perm, Russia September 20, 2021, in this still image taken from video. REUTERS/Anna Vikhareva NO RESALES. NO ARCHIVES

MOSCOW (Reuters) - A student who opened fire at a university in Russia on Monday is alive and being treated in hospital, the Investigative Committee law enforcement agency said, contradicting an earlier statement from the university that he had been killed.

At least eight people were killed and several others wounded in the incident at Perm State University, around 1,300 km (800 miles) east of Moscow. 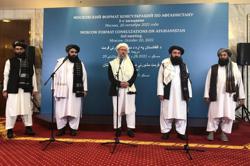