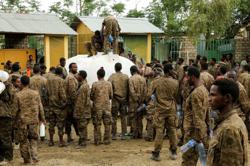 FILE PHOTO: A tank damaged during the fighting between Ethiopia's National Defense Force (ENDF) and Tigray Special Forces stands on the outskirts of Humera town in Ethiopia July 1, 2021. REUTERS/Stringer/File Photo

WASHINGTON (Reuters) -The United States on Friday paved the way for further sanctions to be imposed on parties to the conflict in northern Ethiopia, where thousands have been killed and millions are in need of humanitarian assistance.

A new executive order allows Washington to take punitive action against those in the Ethiopian and Eritrean governments, the Tigray People's Liberation Front (TPLF) and the Amhara regional government if they continue to pursue military conflict over negotiations, senior U.S. administration officials said.

The move, which increases pressure on the parties to come to the negotiating table and bring an end to the fighting, comes after Washington has repeatedly called for a negotiated end to the conflict and for aid access to the northern region of Tigray, where the conflict began.

"Unless the parties take concrete steps to resolve the crisis, the administration is prepared to take aggressive actions under this new executive order to impose targeted sanctions against a wide range of individuals or entities," a senior administration official warned.

Billene Seyoum, the Ethiopian prime minister's spokeswoman, did not immediately reply to a request for comment. The Eritrean minister of information and a spokesman for the TPLF were unreachable for comment.

War broke out 10 months ago between Ethiopia's federal troops and forces loyal to the TPLF, which controls Tigray.

Since then, thousands have been killed and more than 2 million have fled their homes. Fighting spread in July from Tigray into the neighboring regions of Amhara and Afar, also in the country's north. Fighting in those two regions has displaced hundreds of thousands of people and made about 1.7 million dependent on food aid.

"The United States is determined to push for a peaceful resolution of this conflict," President Joe Biden said in a statement, calling for parties to the conflict to halt their military campaigns and come to the negotiating table, respect human right and allow humanitarian access.

More than 5 million more people within Tigray need humanitarian assistance but fewer than 10% of needed supplies have reached the region over the past month due to obstruction of aid, the administration official said, describing the situation as one of the "worst humanitarian and human rights crises in the world."

The U.S. Treasury Department is also issuing general licenses to provide exemptions for development, humanitarian and other assistance, as well as for critical commercial activity in Ethiopia and Eritrea, to ensure the new sanctions do not harm those suffering from the conflict, the official added.

But the Biden administration held back from imposing sanctions alongside the executive order in hopes that it provides incentive to move away from the military approach, another senior U.S. administration official said.

The first official added that the administration expected significant discussion on Ethiopia next week during the annual high-level week of the United Nations General Assembly.

"Now is the time because we have been engaging for months on this and yet the situation has only deteriorated," the official said. "Now we believe that it's necessary to raise the costs to parties continuing to profit from the war."