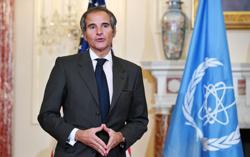 DUBAI (Reuters) - Iran is to allow the U.N. nuclear watchdog to service monitoring cameras at Iranian nuclear sites after talks on Sunday with IAEA head Rafael Grossi, according to the head of Iran's atomic energy body and a joint statement.

The talks with International Atomic Energy Agency chief Grossi were aimed at easing a standoff between Tehran and the West just as it threatens to escalate and scupper negotiations on reviving the Iran nuclear deal.

"We agreed over the replacement of the memory cards of the agency's cameras," Mohammad Eslami, who heads the Atomic Energy Organization of Iran (AEOI), was quoted as saying by Iranian news agencies.

"IAEA’s inspectors are permitted to service the identified equipment and replace their storage media which will be kept under the joint IAEA and AEOI seals in the Islamic Republic of Iran," the nuclear bodies said in a joint statement.

Grossi is expected to hold a news conference at Vienna airport around 8:30 p.m. (1830 GMT) after returning later on Sunday, the IAEA said.

The IAEA informed member states this week that there had been no progress on two central issues: explaining uranium traces found at several old, undeclared sites and getting urgent access to some monitoring equipment so the agency can continue to keep track of parts of Iran's nuclear programme as provided for by the 2015 deal. 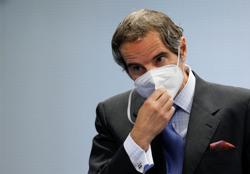