MOGADISHU (Reuters) -Somalia's president has appointed a new head of intelligence, his office said late on Tuesday, intensifying a row with the prime minister, who had named another person to the job.

The rift between President Mohamed Abdullahi Mohamed and Prime Minister Mohammed Hussein Roble threatens to derail an indirect election of lawmakers and president.

On Monday, Roble suspended Fahad Yasin, the director of the National Intelligence Service Agency (NISA), saying his report on the murder of one of its agents had been unsatisfactory, setting off the row.

Mohamed, who called the prime minister's move unconstitutional, designated Yasin Abdullahi Mohamed as the new acting head of the agency. He said Yasin had been appointed as his security adviser.

Roble accused the president of interfering with the investigation of the unsolved murder of the agent, adding that he was concerned by his move to name a new caretaker intelligence chief.

(Reporting by Abdi Sheikh;Writing by Duncan Miriri;Editing by Clarence Fernandez) 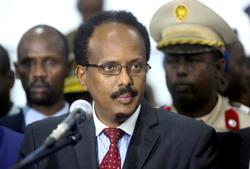