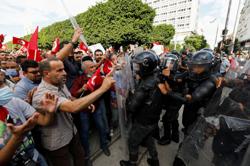 TRIPOLI (Reuters) - Libyan interim Prime Minister Abdulhamid Dbeibeh said on Wednesday he would visit Tunisia on Thursday and meet President Kais Saied after weeks of friction between the North African neighbours over security.

Neither the Tunisian foreign ministry nor presidency were immediately available to confirm Dbeibeh's visit.

The two countries have been in dispute this summer over the closure of borders due to the coronavirus pandemic, a row that deepened after officials in each country said the other posed a security threat.

"We do not accuse the state of Tunisia. Confusion is normal and we respond to any accusation," he said, adding that he would have lunch with Saied on Thursday.

The row has developed since Saied's announcement on July 25 that he was seizing governing power and suspending parliament, moves that his internal critics have called a coup.

Tunisia has been open to Libya during most of the latter's decade of instability since the 2011 NATO-backed uprising that ousted Libyan leader Muammar Gaddafi, and it hosts numerous diplomatic and aid missions focused on Libya.