By Marco Aquino and Marcelo Rochabrun

LIMA (Reuters) -Peruvian President Pedro Castillo on Thursday named Guido Bellido, a member of his Marxist party, as prime minister, a move likely to further spook investors wary of a new leftist government that will also face resistance in Congress.

Bellido, an elected congressman, is a member of the self-described Marxist-Leninist Free Peru party, with which Castillo won the presidency this year.

His appointment underscores the sway that Free Peru will have in Castillo's administration, which is set to end in 2026. Castillo, including in his inaugural speech on Wednesday, has often tried to strike a moderate tone on economic issues, even as party members double down on far left messaging.

Still, Bellido and the rest of the cabinet will need to be confirmed by the opposition-led Congress, where Bellido's leftist position is set to face stiff resistance. A majority of Congress votes are held by center and rightwing parties.

Bellido's swearing in took place in the Southern Andean city of Ayacucho, where Castillo, the son of Andean peasant farmers, won by a landslide.

Bellido, 42, a native of the nearby Andean region of Cuzco, spoke in the indigenous quechua language as part of his swearing in. He's little known in Lima-centric political circles and has a masters in economics, most recently working for Peru's government statistics agency INEI.

Bellido's appointment is likely to further scare investors who were hoping that Castillo would look away from his far left party for political leadership.

Peru's stock exchange and sol currency have plummeted since Castillo became a likely winner of the election, although the key finance ministry post remains vacant.

Sources have told Reuters that the role is likely to be filled by Pedro Francke, a moderate left-wing economist.

The Free Peru Party is led by Vladimir Cerron, a neurosurgeon and Marxist who is an admirer of the governments of Cuba and Venezuela. Cerron was unable to run for the presidency or take a cabinet role due to past corruption charges. 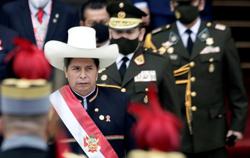 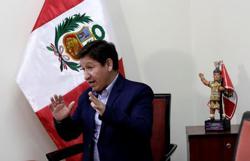