People wait to receive a dose of the Moderna vaccine against the coronavirus disease (COVID-19) at a newly-opened vaccination centre in Athens, Greece, February 15, 2021. REUTERS/Alkis Konstantinidis

ATHENS (Reuters) - Nearly two-thirds of Greeks believe getting vaccinated against COVID-19 can beat the pandemic and most favour mandatory vaccination for certain groups such as healthcare workers, nursing home staff and teachers, a survey showed on Thursday.

The findings come as the government pushes vaccinations by offering cash and other incentives, with the aim of inoculating 70% of the 11 million population by the autumn, compared with 47% at present.

The survey by Alco, a Greece-based polling company, indicates widespread trust in coronavirus vaccines despite a series of demonstrations in central Athens in recent weeks which have drawn thousands of protesters.

Of those surveyed, 63% said they believed vaccines are 'safe' or 'very safe', while 73% were in favor of the mandatory vaccination of healthcare workers and nursing home staff, which the government ordered earlier this month.

However, of those Greeks who have not been vaccinated, as many as 59% said they did not plan to get the shot. Of those, 44% said nothing could change their minds, and 46% said they were against vaccines in general. 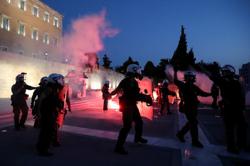