FILE PHOTO: Chelsea owner Roman Abramovich watches the players do a lap of honour after their English Premier League soccer match against Blackburn Rovers at Stamford Bridge in London May 13, 2012. REUTERS/Eddie Keogh

LONDON (Reuters) -Russian billionaire Roman Abramovich is not President Vladimir Putin's "cashier" nor did he buy Chelsea FC as a vehicle to corrupt the West, his lawyer told England's High Court in a defamation hearing over a book about Putin's Russia.

In the 2020 book, British journalist Catherine Belton chronicles Putin's rise to power and how many of his associates from the former Soviet spy services rose to positions of wealth and influence after he won the top Kremlin job in 1999.

A lawyer for Abramovich told the court that passages in the book "Putin's People: How the KGB Took Back Russia and then Took on the West", published by HarperCollins, were clearly defamatory. Abramovich is suing both HarperCollins and Belton.

"The claimant is described in the book as Putin's cashier and the custodian of Kremlin slush funds," Hugh Tomlinson, a lawyer for Chelsea FC owner Roman Abramovich, told the High Court about the book.

"What is said to be happening is that Mr Abramovich is making his wealth available to Putin... secretly to Putin and his cronies - that is the view the reasonable and ordinary reader would take," Tomlinson said of Belton's book.

HarperCollins has said it would "robustly defend this acclaimed and ground-breaking book and the right to report on matters of considerable public interest".

Tomlinson said Belton's book relied on what he cast as "unreliable" sources such as Sergei Pugachev, a Russian businessman who later fell foul of the Kremlin.

He said the book alleged that Putin ordered Abramovich to purchase Chelsea soccer club as "part of a scheme to corrupt the West" and to "build a bulkhead of Russian influence."

"The ordinary and reasonable reader would inevitably come out with the view that Roman Abramovich was instructed to buy Chelsea... so he was being used as the acceptable face of a corrupt and dangerous regime," Tomlinson said.

Lawyers for Rosneft, Russia's biggest oil company, said in documents submitted to court that they took issue with passages in the book which said the company expropriated the YUKOS oil company and purchased the assets at a rigged auction.

Rosneft's lawyers argued that the book alleged that Rosneft used Russia to engage in "organised theft" of Yukos, once Russia's biggest oil company which was carved up and sold off after owner Mikhail Khodorkovsky fell foul of the Kremlin.

Rosneft and CEO Igor Sechin did not respond to written requests for comment on the case when contacted by Reuters.

Lawyers for Rosneft took issue with passages in the book which claimed that Sechin was behind the attack on Yukos.

Tomlinson later told the High Court that two other Russian businessmen who had sued Harper Collins, Mikhail Fridman and Pyotr Aven, had reached an agreement with the publisher over aspects of the book and it had agreed to issue an apology.

Tomlinson said "an accommodation" had been reached between Fridman and Aven and the publisher. Lawyers for Harper Collins could not immediately be reached for comment.

(Reporting by Guy Faulconbridge in London and Vladimir Soldatkin and Tatiana Ustinova in Moscow; Editing by Giles Elgood and Jon Boyle) 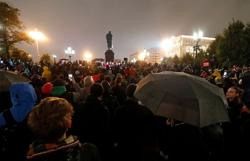