BUENOS AIRES (Reuters) - In the Argentine capital Buenos Aires, a city famed for its passionate tango dancing and romance, the pandemic is putting a dampener on couples making babies, with birthrates down by a quarter since COVID-19 struck early last year.

Claudia Becerra and her boyfriend Agustín Cacciola have long dreamt of having a child, but strict quarantines and economic malaise from the impact of the virus have made them put off their plans.

"Uncertainty is the most difficult thing we face," Cacciola, a 32-year-old lawyer, told Reuters alongside Becerra, an accountant, at their home in the Belgrano neighborhood. He lost his job earlier in the pandemic, which hit their finances.

Becerra, 38, cited worries about getting medical appointments during lockdowns.

"Being a mother had to be postponed a bit due to our professional issues, and last year due to an economic issue for both of us and just everything that happened," she said.

Argentina has seen birthrates dip since 2016, but that accelerated sharply during the pandemic. In the populous city and surrounding province of Buenos Aires, births fell 25% at the start of this year versus the start of 2020, official data show.

"I hear a lot of people say: 'How can I bring a child into this world?,'" gynecologist and sexologist Silvina Valente told Reuters by Zoom, adding that chronic stress from economic issues and the fear of the pandemic led to the drop in births.

The trend has been reflected in Latin America and beyond.

"The pandemic impacts a lot of decisions in family life and obviously it impacted the decision to have children," said Patricio Zalabardo, director of Buenos Aires province's registry of persons.

Argentina has loosened some restrictions, administered over 30 million vaccines for its 45 million people, and seen case numbers ease from recent peaks, spurring hopes that couples may return to home making.

Cacciola recently found a new job and the couple are planning to move to a larger apartment, which they say is making conditions easier to decide to start a family.

"Things have begun to get back into some order and there are fewer restrictions on social activities and medical appointments," said Becerra. "So this year we are going to make the decision about having a baby." 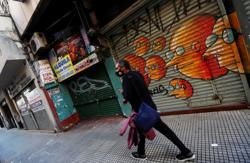