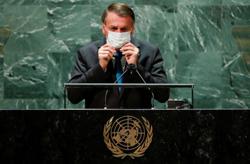 Volunteers in protective suits carry a COVID-19 patient lying on a hospital bed as they try to relocate patients who are dependent on oxygen from the COVID-19 center due to the flood in Myawaddy, Karen state, Myanmar, July 26, 2021, in this handout imaged obtained by Reuters on July 27, 2021. Karen Information Center/Handout via REUTERS

(Reuters) -Flooding in Myanmar has displaced hundreds of people, residents said on Tuesday, adding to the misery of a nation struggling against a fast-spreading coronavirus outbreak while living through the chaos created by a military coup in February.

"Hundreds of houses are submerged in water and only their roofs can be seen," Pyae Sone, a social worker in Hlaingbwe in Kayin State said by telephone.

"COVID is spreading in the town. There are so many people who have lost their sense of smell and many who are sick, it's not clear if it's COVID or seasonal flu.

About 500 residential areas along the Thai border were affected, displacing hundreds of people, the group said.

Bo Bo Win, the head of a charity in the town of Mawlamyine, 120 km (75 miles) away, said at least another 500 people there had also suffered in the floods.

"These floods swamping large areas of eastern Myanmar are the worst in some places for many years and they are causing further misery for people already suffering as COVID-19 surges across the country," said Joy Singhal, Head of Myanmar Delegation, International Federation of Red Cross and Red Crescent Societies (IFRC).

He said the IFRC was urgently securing more relief supplies to support thousands of people at risk from further floods.

Infections in Myanmar have surged since June, with 4,630 cases and 396 deaths reported on Monday. Medics and funeral services put the toll far higher.

The military has struggled to keep control since taking power in a February coup that triggered nationwide protests, strikes and fighting on multiple fronts in border regions as civilians and ethnic armed groups took up arms against the junta.

"The U.N. must act immediately to halt the military junta's attacks, harassment, and detentions in the midst of a COVID-19 crisis," Thomas Andrews, U.N. special rapporteur on human rights in Myanmar, said in a statement, in which he called for a "COVID ceasefire" to tackle the crisis.