STOCKHOLM (Reuters) -Swedish right-wing Prime Minister candidate Ulf Kristersson said on Thursday he was abandoning his attempt to form a government just two days after the speaker gave him the first stab at forming one following the fall of the centre-left cabinet.

"The parliamentary conditions for forming a new centre-right government do not exist," he told a news conference.

Given the composition of the current parliament, Kristersson had been widely expected to struggle to gain sufficient backing.

In a last-ditch effort to lure individual members of parliament to break ranks with their party line, he had promised a lavish reform package on Wednesday aimed at rural development, but this was quickly dismissed by the centrist party that was key to his plans to form a government.

The speaker is now expected to hand the next attempt at government formation to Lofven, who's backing is stronger and potentially sufficient to get his government approved by parliament, though inadequate to assure passage of his budget bills. 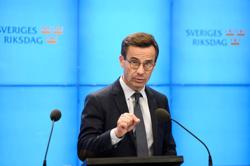