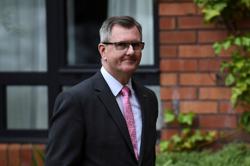 BELFAST (Reuters) - Jeffrey Donaldson sought on Monday to become the third leader of Northern Ireland's Democratic Unionist Party (DUP) in a matter of weeks, pledging to pressure the British government to ditch post-Brexit trade rules for the province agreed with the EU.

These rules effectively treat British-run Northern Ireland as part of the European Union for customs purposes under a protocol designed to avoid politically sensitive border checks with EU member Ireland.

They are deeply unpopular with the DUP and other supporters of the union with Britain because they create trade barriers between the province and the rest of the United Kingdom.

"Now, more than ever, we need to unite in the face of the threats posed to Northern Ireland by the protocol," Donaldson, the DUP's chief in the British parliament, said in a statement.

"Make no mistake, this is the number one issue facing our country, our people and our place within the United Kingdom. If elected, I will ensure that the (British) government doesn't just listen, but recognises the need to take decisive action to deal quickly with the protocol."

British Prime Minister Boris Johnson's government is already at loggerheads with the EU over implementation of the protocol.

Failure to act would "undoubtedly" have consequences for the stability of the power-sharing government that the DUP currently leads with Irish nationalist rivals Sinn Fein, he said.

The DUP, Northern Ireland's largest party, has gone through a tumultuous period since the ousting of its leader and the province's first minister Arlene Foster in late April.

Edwin Poots narrowly defeated Donaldson in the race to replace Foster as party leader but stepped down last week after just three weeks in the job, adding to political instability in Northern Ireland. Poots had been seen as more hardline than Donaldson in his opposition to the protocol.

If nobody else challenges him by 1100 GMT on Tuesday, Donaldson will become leader-designate pending a formal ratification by party officials. If a challenger steps forward, an election among DUP lawmakers will take place on Saturday. 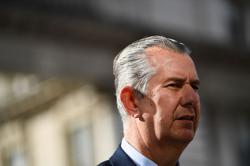 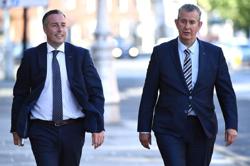