TUNIS (Reuters) - Tunisian President Kais Saied called on Tuesday for a dialogue with political parties on creating a new political system and amending the 2014 constitution, which he described as “with locks everywhere”, in an effort to ease the ongoing political crisis.

Saied's comments could pave the way for an end to a months-long political standoff with Prime Minister Hichem Mechichi, who is backed by parliament Speaker Rached Ghannouchi, leader of the moderate Islamist Ennahda party, over powers and political alliances.

The Tunisian constitution, approved following the 2011 revolution, has been widely praised as a modernist constitution. But many politicians admit that it includes many controversial chapters and needs amendment.

"Let us enter into a credible dialogue... to a new political system and a real constitution, because this constitution is based on putting locks everywhere and institutions cannot proceed with locks or deals", Saied said during a meeting with Mechichi and three former prime ministers.

In April, Saied said that his powers as commander of the armed forces also cover the internal security forces, not only the army, escalating his dispute with Mechichi.‮ ‬He relied also on a controversy over the interpretation of a constitutional chapters.

While Ennahda, the biggest party in parliament, supports a full parliamentary system, Saied wants a presidential system. The current system is mixed, in which the president is elected directly, while most of the powers are in the hands of the prime minister, who is appointed by the ruling coalition.

Tunisia is the only Arab country to have managed a peaceful transition to democracy after the “Arab Spring” uprisings that swept through the region in 2011.

But the North African nation’s economy has been crippled by high debt and deteriorating public services, made worse by the global coronavirus pandemic. 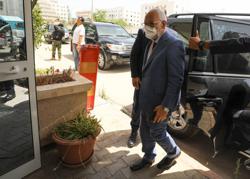 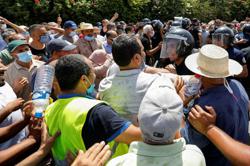