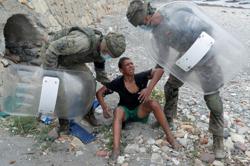 MADRID (Reuters) - Brahim Ghali, the leader of Western Sahara's independence movement Polisario Front, whose presence in Spain has angered Morocco, will attend a high court hearing remotely next Tuesday from his hospital, his lawyer's office said on Thursday.

Ghali is represented in Spain by legal firm Olle Sese Abogados, whose representative, who did not want to be named, told Reuters about Ghali's court date.

Ghali, who has been hospitalised in Logrono in the Rioja region, was served a June 1 summons for a preliminary hearing in a war crimes case against him filed by Saharaui dissidents, according to documents seen by Reuters last week.

The high court said he could attend the hearing remotely from the hospital through a video conference if he has not fully recovered.

Ghali's admittance in a Spanish hospital a month ago has angered Morocco and triggered a crisis between the two countries after Morocco let thousands of would-be migrants cross into Spanish enclave of Ceuta.